“ISDS: A Corporate Cluster Bomb To Obliterate Our People’s Sovereignty” 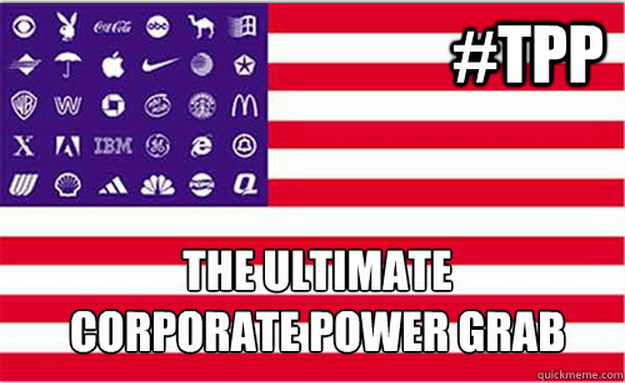 “ISDS: A Corporate Cluster Bomb To Obliterate Our People’s Sovereignty”
by Jim Hightower

“The Powers That Be are very unhappy with you and me. They’re also very unhappy with senators like Elizabeth Warren, activist groups like Public Citizen, unions like the Communications Workers of America and… well, with the majority of Americans who oppose the establishment’s latest free-trade scam.

Despite its benign name, the Trans-Pacific Partnership is a cluster bomb of legalized “gotchas” that won’t bode well for the vast majority of Americans and for our small businesses. TPP empowers global corporations from Brunei, Japan, Singapore, Vietnam, and seven other nations to circumvent and even overturn our local, state, and national laws. Those moneyed elites are upset that rabble like us oppose their latest effort to enthrone corporate power over citizen power, and they’re particularly peeved that we’ve found TPP’s trigger mechanism — something called “Investor-State Dispute Settlements.”

That’s a mouthful of wonky gobbledygook, isn’t it? Indeed, ISDS is an intentionally arcane phrase meant to hide its democracy-destroying impact from us. It would create a system of private, international tribunals through which corporations (i.e., “investors”) could sue our sovereign governments to overturn laws that might trim the level of corporate profits that — get this — they “expected” to make.

These tribunals are not part of our public courts of justice but are totally privatized, inherently biased corporate “courts” set up by the UN and the World Bank. A tribunal’s “judges” are corporate lawyers, and they unilaterally decide whether the protections we’ve enacted for workers, consumers, our environment, etc. might pinch the profits of some foreign corporation.

This mess all started when the Dr. Frankensteins on our Supreme Court created a monster by declaring that a lifeless, soulless corporation is a “person.” But the corporate giants thought, “Why stop there?” So now, another coterie of Frankensteins is trying to transform multinational private corporations into “nations.” The secretly engineered Trans-Pacific Partnership magically endows private profiteering corporations with sovereign rights equal to those of real nation-states. Under TPP, a “corporate nation” — unlike individual citizens of real nations — could directly compel the U.S. or other countries to alter their laws in order to increase corporate profits. Of course, the Frankensteins dismiss such concerns as an “irrational fear,” claiming that no corporation would actually be able to force a country to change its laws.

To give you a look of what this is going to look like, let’s take a peek at what other corporate-written trade deals have done to the laws written in the USofA.

Remember that these Frankensteins say that no corporation outside our country can change our laws. Really? Well, just ask “Flipper” the dolphin. While not yet able to confront a nation directly, corporations can get their home governments to sue in the World Trade Organization to overrule another nation’s laws. That’s what happened to our “dolphin-safe” tuna labeling law. Most Americans oppose tuna fishing with nets that also catch and kill the loveable Flipper, so we have a law encouraging dolphin-free fishing methods. Tuna packers that comply can put “dolphin-safe” on their labels, thus giving consumers a marketplace choice. Free enterprise at work! But some Mexican fishing companies got their government to complain that our label discriminates against their dolphin-slaughtering methods — and a World Trade Organization “compliance” panel ruled that our label is a “technical barrier to trade,” essentially overruling a law that We the People enacted.

And now, if the Trans-Pacific Partnership is approved, foreign corporations won’t have to get their national governments to intervene, for they will become governments. Jefferson, Madison, Adams, and the other revolutionaries of 1776 would upchuck at this desecration of our nation’s democratic ideals — and so should we. For the lowdown on this and to join today’s rebellion against the aristocracy of corporate elites, go to www.citizen.org/trade/.”
- http://www.nationalmemo.com/
Related:

“The Trans-Pacific Partnership and the Death of the Republic”
- http://ellenbrown.com/
Posted by CoyotePrime at 5:32 AM