“How many arches can you count in the below image? If you count both spans of the Double Arch in the Arches National Park in Utah, USA, then two. But since the above image was taken during a clear dark night, it caught a photogenic third arch far in the distance- that of the overreaching Milky Way Galaxy. Because we are situated in the midst of the spiral Milky Way Galaxy, the band of the central disk appears all around us. 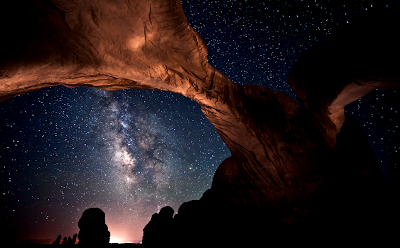 Click image for larger size.
The sandstone arches of the Double Arch were formed from the erosion of falling water. The larger arch rises over 30 meters above the surrounding salt bed and spans close to 50 meters across. The dark silhouettes across the image bottom are sandstone monoliths left over from silt-filled crevices in an evaporated 300 million year old salty sea. A dim flow created by light pollution from Moab, Utah can also be seen in the distance.”
- http://apod.nasa.gov/apod/ap110524.html
Posted by CoyotePrime at 2:40 PM