Chet Raymo, “Moments of Being” 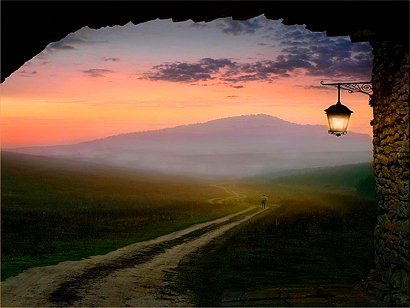 “Moments of Being”
by Chet Raymo

“A passage from the "Pensees" of Teilhard de Chardin: "Though the phenomena of the lower world remain the same- the material determinisms, the vicissitudes of chance, the laws of labor, the agitations of men, the footfalls of death- he who dares to believe reaches a sphere of created reality in which things, while retaining their habitual texture, seem to be made out of a different substance. Everything remains the same so far as phenomena are concerned, but at the same time everything become luminous, animated, loving..."

Whatever we think of Teilhard's Christocentric phenomenology, however much we are baffled by his vague and gushy prose, it is clear from his writing that he was a man who was in love with the world and experienced it as luminous, animated, and loving. Certainly, the experience he describes is not restricted to "he who dares to believe," by which Teilhard means a specifically Christian faith, or at least a faith which for him involved an image of the "cosmic Christ." No, I would suggest that the interior experience of the world he describes- as luminous, animated, and loving- is an predisposition of the human condition, part of our evolutionary makeup. It finds expression in religion, certainly, but also in art, music, poetry, scientific discovery, and in even in the quiet contemplation of a single flower or grain of sand.

It is an experience we all consciously or unconsciously seek, with varying degrees of success. For certain people- an artist like Kandinsky or a mystic like Teilhard- the interior rhapsodic state seems more or less permanent. For most of us, its achievement is a struggle against the humdrum and superficial, the "habitual texture" of things.

The challenge is not to abjure the world of immediate sensation, but to experience the world as fully as our present knowledge allows- not just earthworms and nematodes, wind and weather, Sun, Moon and stars, but also the ineffable flow of atoms, the ceaseless dance of the DNA, the whirling of the myriad galaxies, the infinite and the infinitesimal- to see in the mind's eye and feel in the mind's heart the fire and the flow that animates all things. We may not experience the universe as "loving," but we might certainly find it lovable.

"The whole universe is aflame," wrote Teilhard. His vision was partly informed by his science and partly by his religious faith. And partly, surely, because he was born with a particularly acute sensitivity to the ineluctable wholeness of things. Those of us of a less sensitive nature will settle for the occasional moments when the gates of our senses unaccountably fling themselves open to the unspeakable and unspoken mystery of the world.
- http://blog.sciencemusings.com/
Posted by CoyotePrime at 4:00 PM