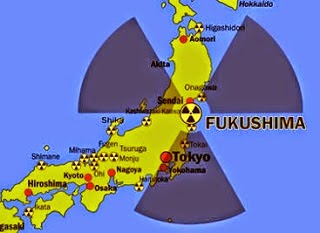 “Your Radiation This Week”
by Bob Nichols

(San Francisco) May 15, 2015 – "Good Day, this is “Your Radiation This Week.” These are the recorded Radiation Highs that affected people this week around the United States and in your neighborhood. Let’s get right to it.

RADIATION   CPM*   CITY STATE
*Listed in Counts per Minute, a Count is One Radioactive Decay Registered by the Instrument. Partial Counts are noted. Uncounted radiation would make the Count higher. 50 CPM is an alert level.

(Please note that these levels will show a gradual rise as the radiation is continually carried and deposited by the wind, literally everywhere. It bio-accumulates in living organisms, like humans, with known and predictable results. In the video below note the reference to "high 50's" as being of deep concern, then look again at the above numbers... - CP)

Where are the Alphas? Alpha radiation is not mentioned in the EPA or EPA derived websites. The best measurement of Alpha radiation is most often from your own Monitor, often called a Geiger Counter. The Monitors are widely available and quite legal to own in the States. Other than that the Alphas have largely gone missing in official or reports derived from official data. That means that all of the measurements in Your Radiation This Week are lower than the radiation actually is. The numbers are lower since they are taken from the “official” numbers. Since this is a known fact, not a hypothetical, you are urged to be Alert.

Alpha Rays from a Radioactive Particle in Lung Tissue

This is a picture of a radioactive particle’s radioactive tracks in the lung of an ape. These are the tracks of Alpha radiation over a period of 48 hours from a particle of Plutonium. Of course, these particles are all over the world now and doing the same thing in your lungs. The range of the Alpha radiation is about 20 human cells and all are obliterated within this range.[6] [8]

It is a simple matter for the US Department of Defense and affiliated agencies to request tissue samples from obliging and cooperative medical examiners across the country. The actual radiation poisoning levels of the population can be tracked this way. That way the DOD accurately tracks the Gamma and Beta radiation in the United States’ population and the increase in radiation poisoning over time.

It is incorrect to assume that the DOD will tell Americans anything about their radioactive status. That is not their job. That task is left to the EPA which analyzes and prepares the data for public release after consultation with state and federal officials. No data or public announcements have yet been made except the familiar “There is No Immediate Danger.” That is to say you won’t get sick and die in the the next few seconds. It is probably quite true, actually. There are exceptions, of course. An excursion inside the exploded reactor buildings in Japan will take you down immediately.

Last week a reader asked a question about Cesium137 in the atmosphere and air travel. Of course, there are about 2,000 other radioactive isotopes with the Cesium137. The Cesium137 and all its radioactive cousins are in the air and airplane with you. That is certainly not a good thing, it is called radiation poisoning.

There is a lot of discussion on line and face to face in meetings, large and small, whether there is more Rad or less Rad at 40,000 ft, or 12,192 meters. A person certainly is moving through more air at speed than when on the ground. This is all the more reason to have your own radiation meter if you travel by air since the Rad gets in the airplane. The radioactive material gets all over the aircraft, too, inside and out. The Rad has the same aging, embrittling, poisonous effect on metal, plastic, fasteners and other items in airplanes as it does in people. Radiation is just really, really nasty stuff.

Eugene Wigner discovered the Wigner Effect of radiation. It is named after Mr. Wigner, who discovered it. Wigner was another of Ed Teller’s long time acquaintances. Teller was the director of the Livermore Nuke Weapons Lab, in Livermore, CA. They knew all about the Wigner effect at the Lab, the government knew it… everybody except the people out in the general public; the ones who still fly in airplanes subject to the Wigner effect.[7] They did not know it then; they do not know it now. They are Shorts, however.”

1. The Radiation charts and graphs of the EPA at http://www2.epa.gov/radnet  Don’t skip the “2” in www2.
2. The EPA based reporting of www.NETC.com, an LLC.
3. * This station’s Radiation equals combined Beta and Gamma Radiation. Note: Not all locations have reporting Beta Radiation Monitors. Gamma Radiation Monitors are functioning at all these locations.
4. “…If you pollute when you DO KNOW there is NO safe dose with respect to causing extra cases of deadly cancers or heritable effects, you are committing premeditated random murder.” – John W. Gofman, Ph.D., M.D. (1918-2007), associate director, Lawrence Livermore National Laboratory 1963-1969) — Comments on a Petition for Rulemaking to the Nuclear Regulatory Commission, May 21, 1994.
5. CPM. “Although we can’t see it, taste it, smell it or hear it we can measure radiation and observe its effects. One way to measure radiation which the United States Environmental Protection Agency [EPA] has chosen to use on its radiation websites is in Counts Per Minute. Each Count is One Radioactive Decay.” Quote from the ‘Your Radiation, This Week.’” Apr 3, 2015.
6. Photo by Robert Del Tredici from his book entitled "At Work In The Fields Of The Bomb" (Harper and Row, 1987)
7. I just got over 500,000 hits when I Googled: Wigner Effect and I Googled: Wigner dust is everywhere.
8. "How Low Doses Of Radiation Can Cause Heart Disease And Stroke"
◆
Former Japan TV News Anchor: "The mutations have begun in Fukushima; Birds found blind, unable to fly — Magazine: “Birds in tailspin 4 years after Fukushima… the proverbial canary in a coalmine” — Professor: "Birds with mutations popping up all over in contaminated areas" (VIDEO)

Gov’t Experts: "Hordes of jellyfish 10 blocks long off west coast of Seattle; "So dense it’s like you can just walk on them." Disturbing when all you pull up are huge masses of jellyfish.; NPR: "They seem to be replacing fish in food chain. Herring disappear, mysterious spike in salmon deaths." (PHOTOS)

Former Tepco Engineer: "Fukushima meltdown was ignited by quake, not tsunami; Serious damage caused reactor to lose coolant.  Lies will likely be exposed before long."  Expert: “I think all units sustained damage from quake” (AUDIO) November 17, 2013
Posted by CoyotePrime at 11:10 AM