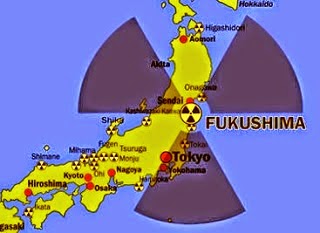 "Your Radiation This Week"
by Bob Nichols

(San Francisco) May 29, 2015 – "Good Day, this is “Your Radiation This Week.” These are the recorded Radiation Highs that affected people this week around the United States and in your neighborhood. Let’s get right to it.

*Listed in Counts per Minute, a Count is One Radioactive Decay Registered by the Instrument. Partial Counts are noted. Uncounted radiation would make the actual Count higher. 50 CPM is an alert level.

City Leaders this Week: Billings, Montana emerges as the winner with just a Partial Rad Report and 871 CPM. They are followed very closely by Bakersfield, California at 824 CPM, and Bakersfield had a Combined Rad Report, too! As varied as the Rad numbers are it's anybodys guess as to what city or town will hit 1,000 CPM first. Stay tuned and we ll keep you advised on Your Radiation This Week.

As for the future, this is as good as it gets. No matter how hard we try, no matter how much we promise to be good: this is it, it is over. It is all downhill from here for humanity, all the way to Extinction.

Summing it up: Years ago at the start of the nuclear age 50 Counts Per Minute (CPM) was considered an Alert Level. Now Billings Montana reads 871 this week on the Geiger Counter, Bakersfield, California had a reading of 824 CPM on the Geiger Counter, a device that measures the level of Radiation. You can see other high radiations counts above. Did you ever think that any city or town in the United States would hit 800 CPM of Radiation?"
Sources:
1. The Radiation charts and graphs of the EPA at http://www2.epa.gov/radnet Don 't skip the 2 in www2.
2. The EPA based reporting of NETC.com, an LLC.
3. * This station s Radiation equals combined Beta and Gamma Radiation. Note: Not all locations have reporting Beta Radiation Monitors. Gamma Radiation Monitors are functioning at all these locations.
4. "If you pollute when you DO KNOW there is NO safe dose with respect to causing extra cases of deadly cancers or heritable effects, you are committing premeditated random murder." John W. Gofman, Ph.D., M.D. (1918-2007), associate director, Lawrence Livermore National Laboratory 1963-1969). "Comments on a Petition for Rulemaking to the Nuclear Regulatory Commission", May 21, 1994.
5. CPM. Although we can t see it, taste it, smell it or hear it we can measure radiation and observe its effects. One way to measure radiation which the United States Environmental Protection Agency [EPA] has chosen to use on its radiation websites is in Counts Per Minute. Each Count is One Radioactive Decay.  Quote from the "Your Radiation, This Week. Apr 3, 2015."
8. Thanks to Robert Kroller, Columnist, for his article "Nuclear Realism."
-http://www.veteranstoday.com/
◆
ENENews:

"Surge in whale deaths along West Coast. Experts: “So many in such a small area is setting off alarms. We really don’t know what’s going on.” Professor: “I’m not sure this is just a natural event. There may be a disease in ocean.” Gov’t: “We’re not even concerned about it.” (VIDEOS)"
- http://enenews.com/

"Nuclear official warns of explosions at Fukushima plant. Gases accumulating in sediment underneath highly contaminated water; Spark caused by static electricity could ignite hydrogen blast."
- http://enenews.com/
◆
"We don't know..."; "We really don't know..."; “We’re not even concerned about it.”
Really?
Posted by CoyotePrime at 3:41 PM