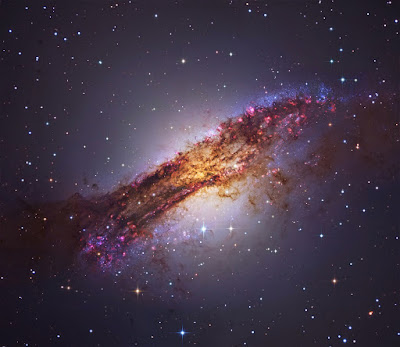 Click image for larger size.
The colorful galaxy portrait is a composite of image data from space- and ground-based telescopes large and small. Near the galaxy's center, left over cosmic debris is steadily being consumed by a central black hole with a billion times the mass of the Sun. As in other active galaxies, that process generates the radio, X-ray, and gamma-ray energy radiated by Centaurus A.”
- http://apod.nasa.gov/apod/ap151119.html
Posted by CoyotePrime at 2:09 PM