“Are You Depressed, Or Just Human?” 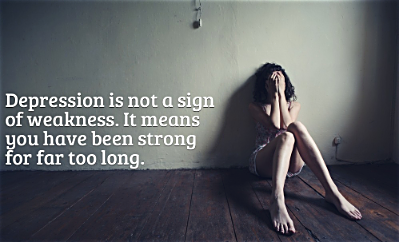 “Are You Depressed, Or Just Human?”
by Dr. Andrew Weil

"Depression can be devastating. Its worst form, major depressive disorder, is marked by all-encompassing low mood, thoughts of worthlessness, isolation, and loss of interest or pleasure in most or all activities. But this clinical description misses the deep, experiential horror of the condition; the suffocating sense of despair that can make life seem too arduous to bear. Here's something else we can say confidently about depression: it is complex. The cause is often a mix of factors including genetic brain abnormalities, sunlight deprivation, poor nutrition, lack of exercise, and social issues including homelessness and poverty. Also, cause and effect can be hard to tease apart - is social isolation a cause or an effect of depression?

Unfortunately, we can make one more unassailable observation about depression: the disorder - or, more precisely, the diagnosis - has gone stratospheric. An astonishing 10 percent of the U.S. population was prescribed an antidepressant in 2005; up from 6 percent in 1996. Why has the diagnosis become so popular? There are likely several reasons. It's possible that more people today are truly depressed than they were a decade ago. Urbanized, sedentary lifestyles; nutrient-poor processed food; synthetic but unsatisfying entertainments and other negative trends, all of which are accelerating, may be driving up the rate of true depression. But I doubt the impact of these trends has nearly doubled in just ten years.

So here's another possibility. The pharmaceutical industry is cashing in. In 1996, the industry spent $32 million on direct-to-consumer (DTC) antidepressant advertising. By 2005, that nearly quadrupled, to $122 million. It seems to have worked. More than 164 million antidepressant prescriptions were written in 2008, totaling $9.6 billion in U.S. sales. Today, the television commercial is ubiquitous:

• A morose person stares out of a darkened room through a rain-streaked window.
• Quick cut to a cheery logo of an SSRI (selective serotonin reuptake inhibitor, the most common type of antidepressant pharmaceutical).
• Cross-fade to the same person, medicated and smiling, emerging into sunlight to pick flowers, ride a bicycle or serve birthday cake to laughing children.
• A voice over gently suggests, "Ask your doctor if [name of drug] is right for you."

The message - all sadness is depression, depression is a chemical imbalance in the brain, this pill will make you happy, your doctor will get it for you - could not be clearer. The fact that the ad appears on television, the ultimate mass medium, also implies that depression is extremely common.

Yet a study published in the April, 2007, issue of the “Archives of General Psychiatry,” based on a survey of more than 8,000 Americans, concluded that estimates of the number who suffer from depression at least once during their lifetimes are about 25 percent too high. The authors noted that the questions clinicians use to determine if a person is depressed don't account for the possibility that the person may be reacting normally to emotional upheavals such as a lost job or divorce (only bereavement due to death is accounted for in the clinical assessment). And a 15-year study by an Australian psychiatrist found that of 242 teachers, more than three-quarters met the criteria for depression. He wrote that depression has become a "catch-all diagnosis."

What's going on? It's clear that depression, a real disorder, is being exploited by consumer marketing and is over-diagnosed in our profit-driven medical system. Unlike hypertension or high cholesterol - which have specific, numerical diagnostic criteria - a diagnosis of depression is ultimately subjective. Almost any average citizen (particularly one who watches a lot of television) can persuade him or herself that transient, normal sadness is true depression. And far too many doctors are willing to go along.

The solution to this situation is, unsurprisingly, complex, cutting across social, medical, political and cultural bounds. But here are three major changes that are needed immediately:

* Medically, thousands of studies confirm that depression, particularly mild to moderate forms, can be alleviated by lifestyle changes. These include exercise, lowered caffeine intake, diets high in fruits and vegetables, and certain supplements, particularly omega-3 fatty acids. Physicians need to be trained in these methods, as they are at the Arizona Center for Integrative Medicine at the University of Arizona in Tucson. See Natural Depression Treatment for more about these low-tech methods, or the "Depression" chapter in the excellent professional text, Integrative Medicine by David Rakel, M.D. (Saunders, 2007).

• Politically, if Congress - which seems hopelessly addicted to watering down all aspects of health care reform - can't manage to ban all DTC ads in one stroke, it should start by immediately ending those for antidepressants.
• Personally, be skeptical of all DTC ads for antidepressants. The drugs may turn out to be no more effective than placebos. Many of them have devastating side effects, and withdrawal, even if done gradually, can be excruciating. While they can be lifesavers for some people, in most cases they should be employed only after less risky and expensive lifestyle changes have been tried.

Finally, recognize that no one feels good all the time. An emotionally healthy person can, and probably should, stare sadly out of a window now and then. Many cultures find the American insistence on constant cheerfulness and pasted-on smiles disturbing and unnatural. Occasional, situational sadness is not pathology - it is part and parcel of the human condition, and may offer an impetus to explore a new, more fulfilling path. Beware of those who attempt to make money by convincing you otherwise.”
- www.sott.net/
- http://www.drweil.com/
About the author: Andrew Weil, M.D., is the founder and director of the Arizona Center for Integrative Medicine and the editorial director of www.DrWeil.com.
Posted by CoyotePrime at 2:26 PM