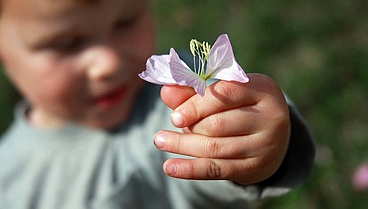 "I went to the woods because I wished to live deliberately, to front only the essential facts of life," wrote Thoreau famously in Walden. The trick, of course, is knowing what is essential. What was essential for Thoreau - the pond, the bean patch, the sounds of night - might not be essential for, say, the ballerina, or the contemplative monk, or the doctor in Darfur. It is what Thoreau said next that unites them all: "I wanted to live deep and suck out all the marrow of life, to live so sturdily and Spartan-like as to put to rout all that was not life, to cut a broad swath and shave close, to drive life into a corner, and reduce it to its lowest terms."

It is not for me to say what are the essential facts of life for others. For myself, I am deeply suspicious of so-called "facts" that come as accidents of birth or upbringing. I look for universals that are part of the human condition by genetic inheritance or general aspiration. I am skeptical, for example, about the "facts" of the Roman Catholic faith, into which I was born and raised, but not to a disposition to reverence and celebration - call it natural religion - which seems to be general. I am respectful of the "facts" of science because of the way they are grounded in universal empirical experience, independent of culture, creed or political persuasion. Thoreau could not live by his pond without wondering about its depth. He plumbed the pond, and plotted the depths on a map, and what he plotted there will pretty much match what might be measured by anyone else.

To live deliberately. The word has at its root the Latin libra, a balance or scales, as in the astrological sign. A scientific instrument. To weigh, to measure, to trust only what can be reliably, reproducibly, quantitatively discerned by the senses. To shave close. To cut away the shabby, moth-eaten brocade of phantasmagoria that has accumulated culturally over millennia, and to discover within my own traditions - Roman Catholicism, the American South, Western European culture - those things that have a universal empirical basis, the things that bind me in a respectful unity with those who have been born into different cultures and traditions.

Drive life into a corner and reduce it to its lowest terms. Sights, sounds, tastes, smells, touches. Food, clothing, shelter. Sex. The need to give and receive love. Altruism. Curiosity. Awareness of mystery. Awareness of how little we really know and understand.”
- http://blog.sciencemusings.com/
Posted by CoyotePrime at 7:25 PM