Chet Raymo, “The Scattered Leaves Of All The Universe” 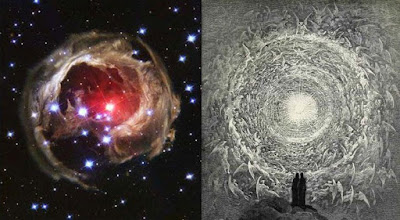 “The Scattered Leaves Of All The Universe”
by Chet Raymo

“Dante Alighieri, the inestimable Florentine poet, carried in his head and gave expression in verse to pretty much the entire universe known to his 13th-century European contemporaries. From the dregs of the Earth to the highest heaven he journeyed in his imagination. His was a universe made expressly for humans, and nothing was in it that was not part of the human drama of sin and salvation. When at last he has ascended through the Great Chain of Being, he looks upon the Godhead itself.

"And within its depths, I saw ingathered,
bound by love in a single volume,
the scattered leaves of all the universe."

Dante encompassed in his poetry what his contemporary Thomas Aquinas sought to do in reasoned prose: present to human understanding all that exists. They looked upon the universe from a privileged position, as unique creatures who joined material and spiritual forms, what the poet John Donne later called "elements and an angelic sprite." How neat, how glorious!

Today we look out onto an altogether different universe, from an altogether different and more humble perspective. No human mind can possibly hold or give expression to the grandeur of the cosmos revealed, say, by the Hubble Deep Field Photograph, a cosmos of at least 100 billion galaxies. Our place within this universe seems altogether ordinary, and what exists elsewhere within those possible infinities of space and time no one can tell. And because no one can tell us with the clarity of a Dante or Aquinas just why we are special, we cling to a 13th-century worldview even as the cosmological basis of that worldview has been blasted to smithereens.

Aquinas's work has been subsumed by science. Where is the Dante of today who will connect the human drama to the new cosmos of the galaxies? Where is the poet who will help us see the universe of the galaxies in a grain of sand? The cosmos of the Divine Comedy, from the center of the planet Earth to the sphere of the fixed stars, the primum mobile, and beyond, is now- we know- itself as a grain of sand in a universe of ungraspable immensity and possibility.

But maybe Dante sensed this himself. In the final lines of the Paradiso, as he gazes into the glorious light of Infinity, he admits his inability to grasp or express what he sees. It is almost as if he were peering into the universe of the galaxies, awed, humble and silent. The Paradiso ends, like the Inferno and Purgatorio, with the word stelle;

“But at last my will and my desire-
like a wheel moving evenly- were revolving
from the love that moves the sun and all the stars.”