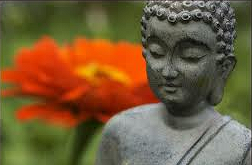 "Siddhartha"
by Hermann Hesse
"Siddhartha" is a novel by Hermann Hesse that deals with the spiritual journey of a boy known as Siddhartha from the Indian Subcontinent during the time of the Buddha. The book, Hesse's ninth novel, was written in German, in a simple yet powerful and lyrical style. It was first published in 1922, after Hesse had spent some time in India in the 1910s. It was published in the U.S. in 1951 and became influential during the 1960s. Hesse dedicated "Siddhartha" to Romain Rolland, "my dear friend".

The word Siddhartha is made up of two words in the Sanskrit language, siddha (achieved) + artha (meaning or wealth). The two words together mean "he who has found meaning (of existence)" or "he who has attained his goals". The Buddha's name, before his renunciation, was Prince Siddhartha Gautama. In this book, the Buddha is referred to as "Gotama".

Plot summary: It starts as Siddhartha, the son of a Brahmin, leaves his home to join the ascetics with his companion Govinda. The two set out in the search of enlightenment. Siddhartha goes from asceticism, to a very worldly life as a trader with a lover, and back to asceticism as he attempts to achieve this goal. The story takes place in ancient India around the time of Gautama Buddha (likely between the fourth and seventh centuries BC.

Experience is the aggregate of conscious events experienced by a human in life – it connotes participation, learning and knowledge. Understanding is comprehension and internalization. In Hesse’s novel "Siddhartha," experience is shown as the best way to approach understanding of reality and attain enlightenment – Hesse’s crafting of Siddhartha’s journey shows that understanding is attained not through scholastic, mind-dependent methods, nor through immersing oneself in the carnal pleasures of the world and the accompanying pain of samsara; however, it is the totality of these experiences that allow Siddhartha to attain understanding. Thus, the individual events are meaningless when considered by themselves—Siddhartha’s stay with the samanas and his immersion in the worlds of love and business do not lead to nirvana, yet they cannot be considered distractions, for every action and event that is undertaken and happens to Siddhartha helps him to achieve understanding. The sum of these events is thus experience.

For example, Siddhartha’s passionate and pained love for his son is an experience that teaches him empathy; he is able to understand childlike people after this experience. Previously, though he was immersed in samsara, he could not comprehend childlike people’s motivations and lives. And while samsara clung to him and made him ill and sick of it, he was unable to understand the nature of samsara. Experience of samsara at this point did not lead to understanding; perhaps it even hindered him. In contrast to this, Siddhartha’s experience with his son allows him to love, something he has not managed to do before; once again, the love itself does not lead to understanding.

The novel ends with Siddhartha being a ferryman, learning from a river, and at long last at peace and capturing the essence of his journey: "Slower, he walked along in his thoughts and asked himself: “But what is this, what you have sought to learn from teachings and from teachers, and what they, who have taught you much, were still unable to teach you?” And he found: “It was the self, the purpose and essence of which I sought to learn. It was the self, I wanted to free myself from, which I sought to overcome. But I was not able to overcome it, could only deceive it, could only flee from it, only hide from it. Truly, no thing in this world has kept my thoughts thus busy, as this my very own self, this mystery of me being alive, of me being one and being separated and isolated from all others, of me being Siddhartha! And there is no thing in this world I know less about than about me, about Siddhartha!”

FREE download, in PDF format, of "Siddhartha," by Hermann Hesse is here:
- http://manybooks.net/titles/hesseheretext01siddh10.html
Posted by CoyotePrime at 7:16 PM