“Have We Lost Our Humanity?” 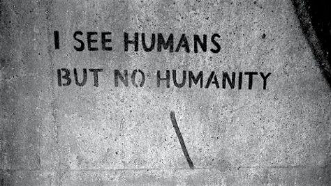 “Have We Lost Our Humanity?”
by Robert Wolff

“Our scientists are renowned. We know so much. But more about the universe and about bacteria and viruses than we know about ourselves. Certainly, we know more than ever about the functioning of our physical selves. We have multiple imaginations about who we are and where we fit into the biosphere, for instance. But somewhere we have lost ourselves as humans. We, meaning the western "we," assume and accept that we are totally apart from the earth and all other creators. We believe we own the planet.

Most of humankind still knows that we are Mother Earth's children, as the President of Bolivia, Evo Morales, said. We are not the boss; we do not own the world. If anything, the planet owns us.

Humans everywhere have rituals and beliefs that strengthen their cohesion as a cooperative community. We westerners, modern humans, have grandiose and unreal beliefs about our unlimited power to do what we want. What we do with all our power endangers our own survival and that of many other species. I think that is because we know so much about matter, and so little about the spirit that is the essence of life.

We have come to think that "spirit" is unmeasurable and therefore not scientific, not worth thinking about. Perhaps because we think spirit is religion, and so outside the realm of science that deals only with matter - another form of energy as Einstein formulated. The only rational something to pay attention to. But to me the word "spirit" does not mean religion. Religion is the package, what we create around spirit. Religion is a form we give spirit and we can make hundreds, thousands of forms.

It is hard to talk about - or define - "spirit" in a culture that accepts only matter as real. To me spirit is more real than matter. It is the awe that is at the core of life. Spirit is in what we call love, compassion. Spirit is the indomitable something of the people who struggled to reach the poles despite inhuman odds, climbed the highest mountains of the Himalayas. Spirit is what makes children surviving a cyclone in Burma take care of each other, when in the confusion no adults are around. Spirit is what makes people all over the world make sometimes great efforts to raise baby animals orphaned by hunters or poachers who killed the nursing mother tiger, or elephant. Spirit is the mysterious something we feel on a lonely beach when happening upon an unusual, almost unreal, sunrise on a far horizon. Spirit, I imagine, is what the first space traveler felt when he saw the earth, the whole earth and understood the miracle of this ball of matter that is alive, held in a trajectory around the sun by invisible forces.

I'm not sure that only humans have spirit. I wonder what animals feel at sunset: usually no wind, fading light, birds who chatter loudly in a tree suddenly silent. Even the roosters here stop crowing. I remember a time when a friend and I were at a rocky beach. Her dog could not stop bounding from one rock to another sniffing and playing with the waves. Until it began to get dark. When a blood-red sun lit up the sky at the far horizon the dog sat frozen at our feet, as enraptured as we were.

Hiding, ignoring, or denying spirit makes a cruel culture. It leaves us searching for ideals. Something greater, more important, than the fear which drives us today. A majority of "We the People" chose the ideals so eloquently spoken, but some politicians did not hear and perhaps had more power through worshipping money.

The irony, of course, is that money is an illusion. A piece of paper printed with the words "ten dollars" is not worth anything but the price of a printed piece of paper. But seller and buyer accept the belief that it can buy ten dollars worth of stuff. History is full of occasions when suddenly people woke up and no longer believed the worth of a piece of paper. The wealth of the super rich is as illusional, it consists of numbers in a computer that we let it intimidate us.

Maybe you think spirit is as illusionary as money because it does not buy anything. Oh, but it does! It does not buy material things, but spirit makes us human. Spirit is what gives compassion. Com-passion: with-feeling. Not doing to others what we do not want others to do to us.

Isn't that the exact opposite of what our current culture does? We do to others what we don't want them to do to us. It is a law of nature, a law of the universe perhaps, that the more we kill others the more the others will kill us.

But what do I know? I'm a 20th Century man, I don't understand this century. But I do know that a culture based on fear is not healthy. If everyone and anyone is suspected of being a possible danger, we make ourselves the danger. A healthy culture is based on trust. It seems to me that is what this Republic was meant to be by the Fathers. Trusting that "We the People" were honorable human beings, trusted to want the best for all of us. Yes, flawed because at the time slaves were not considered quite human (although human enough to bear half white children). But we corrected that.

Now we are plagued with the disease of mistrusting people of another religion, another color, other thoughts. Distrust does not a healthy society make. We have lost the human. Humans are not all alike, humans have unique qualities and talents; that make ours a unique and talented society. We cannot forget or ignore that humans have spirit even when it is hidden behind one or more masks.

Anyone remember "Dune," by Frank Herbert? Famous science fiction of the second half of the last century. This is from that book (the first, the original): “I must not fear. Fear is the mind-killer. Fear is the little-death that brings total obliteration. I will face my fear. I will permit it to pass over me and through me. And when it has gone past I will turn the inner eye to see its path. Where the fear has gone there will be nothing. Only I will remain.”*
-http://www.opednews.com/
*“The Litany of Fear,” Bene Geserit rite, from “DUNE,” by Frank Herbert, c. 1965)
Posted by CoyotePrime at 6:21 PM