“How Christmas Was Nearly Canceled – Permanently” 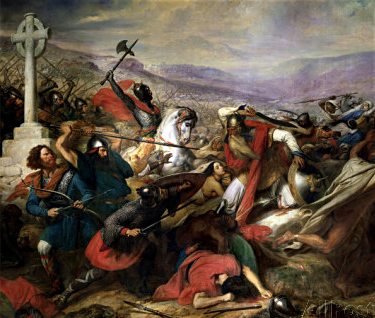 “How Christmas Was Nearly Canceled – Permanently”
by Bill Bonner

POITOU, France –” Well, it was a quiet Christmas in this corner of Christendom. On the eve, we went to Mass in our local church – a cold, stone relic of the 12th century. The best seats were taken by the time we got there, but we found a row of chairs in the back. We are considerably taller than most of the French in this area. So, we had no trouble seeing over the heads of the indigenous Catholics.

The local people are short; many are almost dwarfish. What caused it? Malnutrition many years ago? Was there a particularly short tribe that settled here? We don’t know… but it was on our mind as we looked over the heads to the scene at the altar, where the priest was celebrating the birth of Jesus.

Another thought – driving down from Paris a few days before, we passed a familiar sign: “Near here is the site of the Battle of Poitiers in 732.” It was here – east of Poitiers, between Châtellerault and Chauvigny – that the forces of Charles Martel (or Charles the Hammer) and his army of Franks and Burgundians defeated what was probably the foremost military power of its time – the army of Umayyad Califate, under Abdul Rahman Al Ghafiqi. Had the battle gone the other way… we probably wouldn’t be singing Christmas carols. More… after a quick market update.

Groggy and Distracted: Investors, analysts, and economists are getting back to work today. Groggy and distracted, they are probably thinking even less clearly than usual. Maybe that accounts for the silly comments on CNBC, where a trio of Wall Street analysts told listeners why stocks were likely to go up. A year of “consolidation” is typically followed by a strong move to the upside, said one. Despite the rate hike, the Fed is still “super-accommodative,” said another. Now that the tax-loss selling has finished, added a third, portfolios can be “readjusted,” leading to some “nice positive returns” for the rest of the year. Or not!

It could be, of course, that our concerns about a pending bear market and/or recession are premature. Maybe no correction will come anytime soon. Still, these jokers seem unaware that there is anything to be concerned about. In their minds, stocks go up… they pause only to catch their breath… then they go up again. But, hey, what do you expect?

These guys are “talking their book.” Like all of us, they think what they need to think when they need to think it. Or they don’t think at all. Of course, “talking our book” is what we all do. If we are tall, we see virtue in height. If we are heavy, we proclaim – at least to ourselves – the merits of heft. If we are smart, we are sure intelligence is what matters. And if we are dumb, we are “all heart.”

And if we are Christian?

Quran or Bible? The candles on the altar flickered… We sang the Agnus Dei in Latin. Incense was so thick in the air we could barely make out what was going on. The young priest – a friend of the family since he was 15 years old – was determined to bring some of the pomp and ceremony of St. Peter’s to the cattle country.

But had the Battle of Poitiers, between the Franks and the invading Islamic army gone the other way, “our book” might be the Quran, not the Bible. At least that is what British historian Edward Gibbon thought: "A victorious line of march had been prolonged above a thousand miles from the rock of Gibraltar to the banks of the Loire; the repetition of an equal space would have carried the Saracens to the confines of Poland and the Highlands of Scotland; the Rhine is not more impassable than the Nile or Euphrates, and the Arabian fleet might have sailed without a naval combat into the mouth of the Thames."

Perhaps the interpretation of the Koran would now be taught in the schools of Oxford, and her pulpits might demonstrate to a circumcised people the sanctity and truth of the revelation of Mahomet. We have a number of sources for information about the great battle. Each side had its chroniclers and storytellers, liars, and apologists. All we know for sure is a stout Frankish infantry defeated the much-feared Umayyad cavalry. It was one of the rare instances in the Middle Ages when men on foot held their positions against heavily armed, professional horsemen.

An Historic Victory: Modern historians estimate that there were about 30,000 soldiers – not all of them trained – on each side. They believe the Saracens were headed for the Loire River, where they planned to loot the rich abbey of St. Martin of Tours. Charles – a seasoned military leader – skillfully placed his foot soldiers in their way, on high ground, partly shielded from cavalry attacks by trees and hills.

The two sides skirmished for a week, with Charles refusing to move… and Abdul Rahman unhappy with the proposed battle site. Finally, the Muslim commander could wait no longer; he attacked. The rush of heavy cavalry normally caused infantry to break ranks. The horsemen would then slaughter the defenders as they ran. But the stalwart Franks were experienced and tough: Even when the Moors penetrated their formations, they held fast. Then Charles sent a raiding party around behind the Mohammedans. Word got back to the main force that the Franks had attacked their camp… freeing their slaves and stealing their treasures. This caused some of the invaders to rush to the rear, which must have looked to the others as though someone had ordered a full retreat. In a few moments, the entire Umayyad army had turned around… with the Franks in hot pursuit. Abdul Rahman was caught and killed.

Nightfall found both sides back in their camps. But when morning came, the Franks attacked the Moors’ tents and found that the army had already departed. The Muslims kept going, looting and pillaging the entire way, back to Narbonne, where they maintained a foothold in what is present-day France. Charles kept up the pressure. After a few years, the Muslims were expelled to the other side of the Pyrenees… where they held on for another 700 years.

But here, in rural Poitou, the Moors may never have completely left. Our nearest town is called Montmorillon – the hill of the moors. Many of the people in church have family names that hint at that antique invasion: Maurin, Morin, Morliere, Moreau. (As longtime Diary sufferers may remember, Emile Moreau – governor of the Banque de France in the late 1920s – had a house near here. It was he who, as the world’s central bankers met to adjust Germany’s war debt and recalibrate the world’s money system, decided to go hunting.)

And now – even in Poitou – the Morins, the Morlieres, and the Moreaus all talk their book… and worry about the next Moorish invasion."
- http://www.thedailyreckoning.com
◆
Related:
- http://www.thelatinlibrary.com/imperialism/notes/tours.html

Posted by CoyotePrime at 1:21 PM