"If ever there was a clearer indication of America's "need for war" it was the latest Durable Goods orders data, which confirmed, absent defense spending, the US economy is in a tail-spin. However, as NYTimes reports, foreign arms sales by the United States jumped by almost $10 billion in 2014, about 35 percent, even as the global weapons market remained flat and competition among suppliers increased, thanks to multibillion-dollar agreements with Qatar, Saudi Arabia and South Korea.

Defense Spending New Orders has soared 148% in
the last 3 months, the biggest rise since 2007 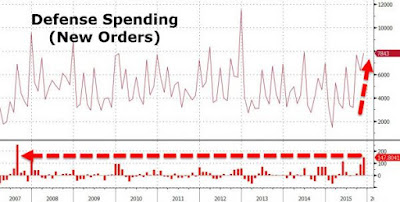 But it is the US arms sales to foreigners that is really flourishing. Despite a stagnant international weapons market and increased competition among suppliers, American foreign weapons receipts rose from $26.7 billion to $36.2 billion last year. According to a new congressional report, as The NY Times reports:

• The United States remained the single largest provider of arms around the world last year, controlling just over 50 percent of the market.
• Russia followed the United States as the top weapons supplier, completing $10.2 billion in sales, compared with $10.3 billion in 2013. Sweden was third, with roughly $5.5 billion in sales, followed by France with $4.4 billion and China with $2.2 billion.
• South Korea, a key American ally, was the world’s top weapons buyer in 2014, completing $7.8 billion in contracts. It has faced continued tensions with neighboring North Korea in recent years over the North’s nuclear weapons program and other provocations. The bulk of South Korea’s purchases, worth more than $7 billion, were made with the United States and included transport helicopters and related support, as well as advanced unmanned aerial surveillance vehicles.
• Iraq followed South Korea, with $7.3 billion in purchases intended to build up its military in the wake of the American troop withdrawal there.
• Brazil, another developing nation building its military force, was third with $6.5 billion worth of purchase agreements, primarily for Swedish aircraft.

The report to Congress found that total global arms sales rose slightly in 2014 to $71.8 billion, from $70.1 billion in 2013. Despite that increase, the report concluded that “the international arms market is not likely growing over all,” because of “the weakened state of the global economy.”
So, as has been explained so many times ad nauseum that even the most hawkish warmongerer cannot avoid it, the truth is, America (well it's corporatocracy) has a 3-step plan to make money...

Seen from the proper angle, the dollar is revealed to be a paper thin instrument of warfare, a ripple effect on the people, a twisted illusion, a weaponized money now engaged in a covert economic warfare that threatens their very livelihood.

Of course, this is hardly news, as Ron Paul, the former Congressman and presidential candidate explained: “Almost all wars, in a hundred years or so, have been paid for through inflation, that is debasing the currency,” he said, adding that this has been going on “for hundreds, if not thousands of years. I don’t know if we ever had a war paid though tax payers. The only thing where they must have been literally paid for, was when they depended on the looting. They would go in and take over a country, and they would loot and take their gold, and they would pay for the war.

As inflation has debased the currency, other shady Wall Street tactics have driven Americans into a corner, overwhelmed with debt, and gamed by rigged markets in which Americans must make a living. The economic prosperity, adjusted for the kind of reality that doesn’t factor into government reports, can’t match the costs of a military industrial complex that has transformed society into a domestic police state, and slapped Americans with the bill for their own enslavement."

Dr. Paul notes the mutual interest in keeping the lie going for as long as the public can stand it, and as long as the gravy keeps rolling in: “They’re going to continue to finance all these warmongering, and letting the military industrial complex to make a lot of money, before it’s admitted that it doesn’t work, and the whole system comes down because of the debt burden, which would be unsustainable.” Unsustainable might be putting it lightly. The entire thing is in shambles from the second the coyote looks down and sees that he’s run out over a cliff.”
- http://www.zerohedge.com/
◆ 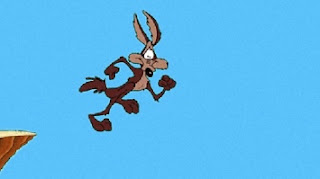