NOT Satire: "See Something Suspicious Online? Homeland Security Wants to Know About It" 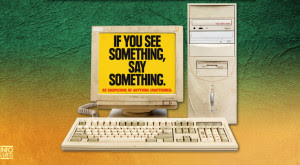 "See Something Suspicious Online?
Homeland Security Wants to Know About It"
by Jack Moore

"The Department of Homeland Security wants an extra $1 million next year to develop a public-service campaign designed to increase awareness of online threats. The new initiative will be modeled on the “If You See Something, Say Something” effort rolled out after the Sept. 11 attacks. The new cyber PSA “will look to raise public and private sector awareness of cybersecurity and to emphasize the importance of cyber awareness and information safekeeping,” according to an explanation of the project in fiscal 2017 budget documents released last week. DHS will work with state and local governments, law enforcement agencies, academic institutions and private sector companies as part of the campaign, according to budget documents.

The original “See Something, Say Something” first debuted in the New York City in 2002 in the aftermath of the 9/11 terror attacks to raise awareness of suspicious activity that could be related to terrorist activity. In 2010, DHS took the campaign nationwide, blanketing airports, train stations and public transportation networks with ads and announcements. The cyber-focused campaign would be small to start. DHS is seeking just $1 million and one full-time employee to administer the program out of Homeland Security’s Office of Partnership and Engagement. The proposed staffer would earn an approximate salary of $94,000 a year at the GS-13 or GS-14 level. The remaining funds would be spent on distributing materials, ad buys and other efforts related to the campaign.

Since 2004, DHS has sponsored National Cybersecurity Awareness Month in October to educate the public about safe online behavior. DHS rolled out a cybersecurity-focused public awareness campaign- “Stop. Think. Connect.”- in 2010, although it’s unclear how deeply that campaign has penetrated public awareness.

A report last summer from market research firm IDC recommended the U.S. government to beef up public-awareness campaigns around cybersecurity. "The United States lacks a cybersecurity-focused culture," the report concluded, contrasting U.S. readiness with that of Israel, which has a “cultural mindset that is suspicious of unsolicited emails” and “is consistently mindful of security.” 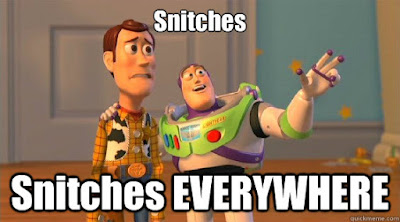 What? Relocating this blog to Guantánamo Bay?
For being "Critical of the government?"  Oh...
;-)
Posted by CoyotePrime at 1:16 PM