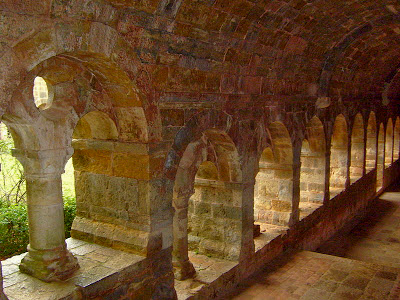 “Early in Claire Messud's new novel, “The Woman Upstairs”, the narrator asks herself and others whether they would rather be able to fly or be invisible. I suspect most who visit this blog would prefer to fly. Me too. Until lately. More on that later. For now I want to ask a less frivolous question, one more likely to split down the middle: Do you prefer, as a matter of personal taste, Romanesque or Gothic?

I have visited the great Gothic cathedrals of Europe, admired their beauty, and stood astonished at their engineering. But it is the Romanesque abbeys and monastic houses, such as the Cistercian Abbey of Le Thoronnet in Provence, that most deeply stir my soul. It is an architecture of inward turning, of silence, of rest. Of the subtle play of light on stone. Of firmness. Rootedness. An architecture of the circle, diurnal and annual, where every prayer is a whisper, and every whisper echoes infinitely along a corridor or vault.

There, I've had my say. Let the Gothicists among you have yours.

To fly or be invisible? My days of flying, or wanting to fly, are over. Now, at age 79, I would choose to be invisible. To watch unseen. To walk like a specter in a Romanesque cloister, listening to the wind and the voices of the monks leaking from the abbey choir. To feel the coolness of rough-hewn stone against my invisible palm, to trace shadows that I do not cast myself. To discard the cloak of my skin, to dissolve my bones in the moted air, to become as insubstantial and surrendering as a Te Deum chanted at Matins end.”
- http://blog.sciencemusings.com/
Posted by CoyotePrime at 8:34 PM