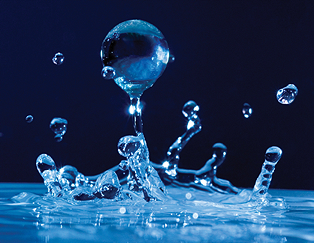 “Speaking of Water…”
by Chet Raymo

“How many water molecules- H2O- are there in the world's oceans? This is the kind of time-wasting calculation I love doing, but I will leave it as an exercise for one of you.

How many cubic centimeters in the oceans? Look up the radius of the Earth (in centimeters). The area of a sphere is 4πr2, and about three-quarters of the Earth's surface is ocean. The average depth is about 4 kilometers, or 4x105 centimeters. You're home free. Make it easy. Use powers of ten and round off generously.

And what did you get? A very big number indeed. A number so big it is essentially meaningless. Its meaning is its meaninglessness. Its meaning is the almost incomprehensible gulf between the world of our senses and the world of atoms. Between what we are and what we are made of. Why even do such a calculation? Only to show that the human brain can frolic in the world of atoms and molecules with a pencil on the back of an envelope. Go for it. Have fun.”
- http://blog.sciencemusings.com/
Posted by CoyotePrime at 4:52 PM