"Morning Joe Mocks Hillary The 'Working Man Hero'"
"The Morning Joe panel mocks Hillary's attempt to position herself as the 'Working Man's Hero.' When Hillary says she has spent time with regular people, she must be referring to Secret Service agents, chauffeurs, and her friends on Wall Street."
- https://www.youtube.com/watch?v=B_xfEQaBDNM

Well, let's not be too hasty or harsh to judge this self-proclaimed champion of the common folks with whom she shares so much, the average Americans who work hard, pay their taxes, do the best they can under very difficult conditions. They, we, must the be "Us" in her slogan, right? 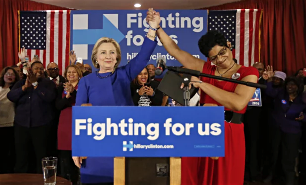 OK, since I'm slow, someone please tell me who exactly she's "fighting for us" against? Evil space aliens hiding in the government? What battles has she won for "us"? I don't know, do you? Could it be she battled the evil banksters and corporations? Well, probably not...

Besides, a gal's gotta make a living, right, and these are hard times for most of us, including Hillary, who works very hard for her money. When challenged by The Guardian to explain her ability to speak on income inequality after making an avalanche of money in her post-White House years, Hillary tried to claim that she’s not rich-rich and besides, she’s worked hard. Unlike the rest of those who have wealth, apparently. “But they don’t see me as part of the problem,” she protests, “because we pay ordinary income tax, unlike a lot of people who are truly well off, not to name names; and we’ve done it through dint of hard work,” she says, letting off another burst of laughter. If past form is any guide, she must be finding my question painful." Making $153 million is not being “truly well off,” you know.

Besides, we all have bills to pay, right? Mortgages are big bills, aren't they? But Hillary understands how tough it can be, and how much life experience we all share. Each of us has a house, or apartment, or a cardboard box in an alley if need be, and she has a house, too, so she understands... 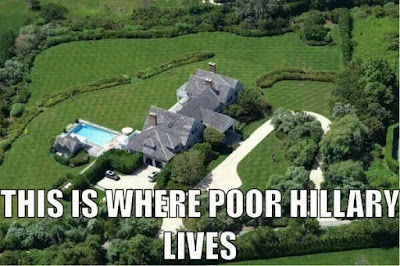 $12 million house... wonder if she gets Section 8 assistance?

How rude of that naughty "Morning Joe" crew to mock one of "us"!
We have SO much in common, right? Yeah...
And since we're all equal under the law, are we not, I must ask...
Attorney General Lynch: where are the indictments?
- CP
Posted by CoyotePrime at 3:25 PM