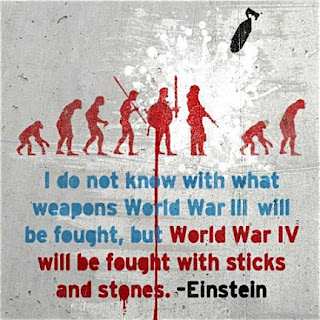 "The Third World War is currently being fought. How long before it moves into its hot stage? Washington is currently conducting economic and propaganda warfare against four members of the five bloc group of countries known as BRICS- Brazil, Russia, India, China, and South Africa.

Brazil and South Africa are being destabilized with fabricated political scandals. Both countries are rife with Washington-financed politicians and Non-Governmental Organizations (NGOs). Washington concocts a scandal, sends its political agents into action demanding action against the government and its NGOs into the streets in protests.

To destablilze Russia, Washington needs a firmer hold inside Russia. In order to gain a firmer hold, Washington worked with the New York mega-banks and the Saudis to drive down the oil price from over $100 per barrel to $30. This has put pressure on Russian finances and the ruble. In response to Russia’s budgetary needs, Washington’s allies inside Russia are pushing President Putin to privatize important Russian economic sectors in order to raise foreign capital to cover the budget deficit and support the ruble. If Putin gives in, important Russian assets will move from Russian control to Washington’s control.

In my opinion, those who are pushing privatization are either traitors or completely stupid. Whichever it is, they are a danger to Russia’s independence. As I have often pointed out, the neoconservatives have been driven insane by their arrogance and hubris. In their pursuit of American hegemony over the world, they have cast aside all caution in their determination to destabilize Russia and China.

By implementing neoliberal economic policies urged on them by their economists trained in the Western neoliberal tradition, the Russian and Chinese governments are setting themselves up for Washington. By swallowing the “globalism” line, using the US dollar, participating in the Western payments system, opening themselves to destabilization by foreign capital inflows and outflows, hosting American banks, and permitting foreign ownership, the Russian and Chinese governments have made themselves ripe for destabilization. If Russia and China do not disengage from the Western system and exile their neoliberal economists, they will have to go to war in order to defend their sovereignty.”
- http://www.zerohedge.com/
◆

"On April 27th, NATO member-state Turkey, which on 24 November 2015 had shot down a Russian Su-24 fighter jet near the Syria-Turkey border, refused Russia’s request to investigate Turkey’s having murdered the surviving Russian pilot. (The plane’s weapons-systems officer was rescued, but the pilot was shot dead while parachuting down from the plane.) Turkey admits having in custody the man, Alparslan Celik, who murdered the parachuting pilot. On April 25th, Turkish authorities had said that they might try Celik for murder; but, now, the Turkish Ambassador in Moscow says Turkey won’t.

Also related to the step-up to war, Russia has reported on April 25th, that it’s responding to America’s recently announced quadrupling of its troops and armaments in the Baltic republics on and near Russia’s northwestern Black Sea borders, by Russia’s sending “more than ten” warships of its own to coastal waters there, for “training exercises,” just as the U.S. troops and weapons are likewise there for “training exercises”, as both sides prepare for an increasingly likely war between NATO and Russia.

If such war occurs, it will be World War III; so, that’s where things are heading, unless and until these escalations reverse on both sides, to avert it.

U.S. President Barack Obama gives, as his cause for his economic sanctions against Russia and for NATO’s subsequent increases in men and materiel being stationed on and near Russia’s borders, what Obama calls Russia’s ‘seizure’ of Crimea from Ukraine. The Soviet dictator Nikita Khrushchev had transferred Crimea from Russia to Ukraine in 1954, but polls of Crimeans always showed overwhelming public opposition to that, and this opposition became especially intense right after the Obama Administration’s coup in Ukraine in February 2014 overthrew with much bloodshed Ukraine’s freely elected President Viktor Yanukovych, for whom 75% of Crimeans had voted. That’s when Crimeans asked Russia to protect them. Russia complied, and Obama and NATO call that restoration of Crimea to Russia a ‘seizure’ of Crimea by Russia. This is supposedly what has sparked the post-February-2014 military escalation between the U.S.-NATO and Russia — and, perhaps (unless the U.S.-NATO side decide to accept Crimea’s return to Russia) WW III.

On April 25th, Obama personally asked the leaders of Germany, France, UK, and Italy, to contribute to the increased NATO troops and weapons near Russia’s Baltic borders. Nothing was announced from that meeting. Clearly, the U.S. is leading the movement toward WW III. Neither the main leaders of Europe, nor — certainly — Russia, seem to be nearly so eager. However, U.S. President Obama says that his concerns are purely of a ‘defensive’ nature — to ‘defend’ the NATO alliance, and the entire world (including Ukraine), from ‘Russian aggression’. He denies that Russia is taking necessary defensive measures against America’s aggression. However, Russia’s President Vladimir Putin says that that’s the way he is seeing things."
- http://www.washingtonsblog.com/
◆
Related:
“The Empire of Chaos Strikes Back”
- http://www.informationclearinghouse.info/article44538.htm
◆
"What Scared and Disabled The USS Donald Cook?"


"The Russian Air Force Khibiny is an advanced aircraft-mounted electronic warfare (EW) system capable of jamming state-of-the-art air defense radar systems. The Khibiny jamming was tested successfully for some time on the ground in Buryatia, Russian Federation. On April 12, 2014, two Russian Air Force Su-24 bombers with no weapons loaded were sent to intercept the US Navy's AEGIS-equipped destroyer USS Donald Cook in the Black Sea. One of them flied around the destroyer up to 12 times while the other one remained away as done usually by both sides during the Cold War period. Unconfirmed reports suggest that the Su-24s were equipped with the Khibiny EW system and were able to neutralize the AEGIS phased array radar target tracking capabilities while the ship's crew was unable to re-boot the system. It is not clear whether the jammer affected the radar system itself or only the computer-based component or either both at the same time. The Russian Air Force plans call for the installation of the Khibiny jammer on all its advanced jets."
◆
Apr 14, 2016