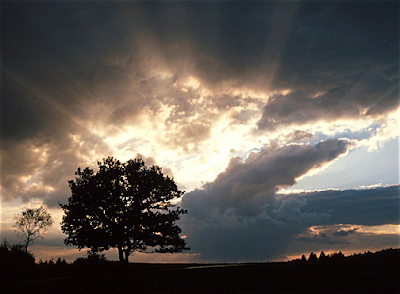 “The Awful Lull”
by Jim Kunstler

“Spring unfolds at last in all its loveliness and Hillary sits back in repose like the matriarch of toads with a clear path to her toadstool throne, having swallowed the mouse-king Sanders. (She forgets that there are millions more mice under the thatched grass, including new mouse-kings awaiting.) And Trump with his bullfrog smile now casts his baleful eye on the two remaining gnats circling his lily pad. Yes, this magical week when the world bursts into leaf and flower, the life of our nation seems like a fairy tale.

Weeks from now when we’re used to the mild air and the greened world, going coatless and care-free, is when the storms of summer strike and the life of the nation turns from fairy tale to horror comic. Both Clinton and Trump are perfect representatives of the nascent forces moving towards some kind of civil war in comic book America.

Clinton perfectly embodies the fortress of the status quo, including especially her praetorian guard of black ghetto grandmothers, giving Hillary the false appearance of some sort of righteousness when, really, she has nothing to offer the greater crisis of black manhood, boxed into prison by the ancient crippling rules of federal welfare policy with its extreme penalties on active fathering. Otherwise, the stone wall of her status quo fortress conceals her privy council of Wall Street necromancers, and the fortune they have helped her lay up in the vaults of the Clinton Foundation.

All of which is to say that Hillary represents the forces that want to keep things just as a they are: rackets rampant. What can crush her triumph of fakery is the sudden manifestation of rackets collapsing under their own weight — a set of awful probabilities waiting to happen, ranging from riots at the Democratic Convention in Philadelphia to an accident in financial markets jerry-rigged to mis-price everything for the purpose of funneling carry-trade gains into East Hampton. Look how she croaks about the triumph of the Affordable Care Act, as though it’s a great thing that Americans can shell out $10,000 a year for medical coverage that only kicks in after you rack up the first $6,000 in charges. (Forgetting for a moment that the costs are an hallucination of the “ChargeMaster” system designed to lavish six-figure salaries plus bonuses on the maestros in the hospital executive suites.) What a demonic fraud this woman is.

In terms of sheer persona on persona, Trump is not much better, a walking hood ornament on the faltering beater car that America has become. But at least he recognizes that the beater beneath him needs a complete overhaul, even if he can barely cobble up a coherent list of particulars, or name the mechanics who might be able to fix the damn thing. And, of course, a broad swathe of Americans whose lives have also come to resemble beater cars are very sympathetic to the impulses Trump radiates.

For example, I happen to agree that the nation needs to act on immigration, both on the problem of illegal immigrants and on limiting the quotas of legally admitted newcomers. The Left, sunk in its sentimental sob stories of “dreamers,” and its nostalgia for the Ellis Island romance of 1904, can’t conceive of any reason why the nation might benefit from, at least, a time-out on invitations. The idea undermines their world-saving fantasies. In my little corner of America, the computer chip factory run by Global Foundries (owned by the Emirate of Dubai) has just laid off the majority of its homegrown American technical labor force and replaced them with foreign technicians on H1B visas, thus creating x-number of new Trump voters among the laid-off, and rightfully so, I think.

Really, who says we have to invite every striver from other parts of the world where striving is more difficult? Let them improve the strive-osity of their own nations. Do the citizens already here not have any right to halt the influx and take stock of the nation’s circumstances for a period of time? If only Trump could speak clearly about these issues instead of simply issuing crude and rather dumb threats.

Enjoy this end-of-April lull in the action. Use the moment to gird your loins and perhaps get the hell out of the financial markets while the getting is good. I think you will see things liven up a lot as the heat rises and the seventeen-year locusts emerge from their long sleep underground in frightening storms.”
- http://www.theburningplatform.com/
Posted by CoyotePrime at 1:55 AM