"Crony Capitalism And The Rigged System"
by mybudget360

"The system is rigged. Like a carnival game, the odds are against you. This isn’t something that started this year or last, but has been going on for many decades. As long as the media was controlled in a few hands the propaganda kept most of the public in the dark. People now have the ability to access information from wherever they want. And that is why in 2016 you have two party outsiders doing so well. Typically, party insiders excel and do well if they follow the party line. The middle class is now a minority in the United States and people are scratching their heads wondering why. That issue is complex but one thing that isn’t complex is how Congress is bought. 0.01% of households gave a stunning 33% of money raised by political parties and Congressmen. It should also not be a surprise that half of Congress is in the millionaire club. In other words, the system does not represent you.

It should be clear that money talks in politics. 0.01% of households gave 33% of money raised by political parties and Congressmen, that is worth repeating: 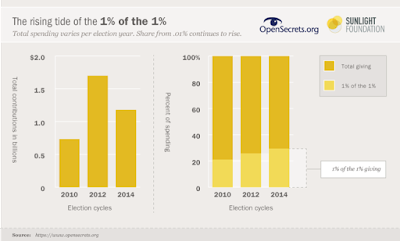 You don’t give money for nothing. There is a quid pro quo here and donors expect their interests to be protected. This is why even in economic crisis, the banking bailouts largely stole money from the public to provide welfare to Wall Street financial firms. Remember too big to fail?  Banks are now even larger.

Money in politics is problematic because the best solution doesn’t necessarily require tons of money. It requires will and the ability to break through the cronyism. It was interesting how poorly Jeb Bush did even though he had a massive war chest of money to begin with. At a certain point, you have to wonder who the system is representing. It shouldn’t be a shock that most members of Congress are millionaires:

Both Democrats and Republicans are in this game together. They only differ in minor ways. That is why this year with Bernie Sanders and Donald Trump having success, it is surprising to hear from candidates that are so far on both sides of the spectrum but both are echoing one similar message – the system is rigged. The public seems to know this and actually wants to hear this message from outsiders. It is funny how party insiders on both sides resent Trump and Sanders.

Both Trump and Sanders say things that don’t fall in line with their party. For example, Sanders wants to make college free for everyone. This message is going over well with young Americans that are in student debt up to $1.3 trillion. Trump is adamantly against our involvement in Iraq and it comes as a shock when a Republican talks about this since we’ve spent trillions of dollars in this boondoggle.

The crony capitalistic system is rigged and people are waking up. Fancy numbers and lies can get you only so far. The media has lost a lot of power and this year, party leaders are losing some power as well. Power never goes easily into the night so expect fireworks this year.”
- http://www.mybudget360.com/
◆
Sanders, Trump... what about the other one, what's-her-face?
Oh, yeah, like always, busy working the (Wall) Street... 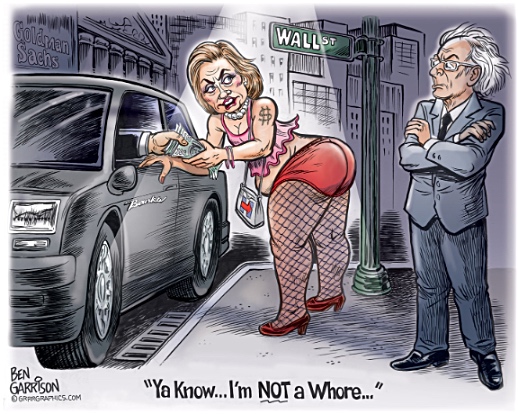 Beg to differ...
"You don’t give money for nothing. There is a quid pro
quo here and donors expect their interests to be protected."
Posted by CoyotePrime at 11:49 AM