Politics: “The Mask Comes Off: Putrefaction Most Foul” 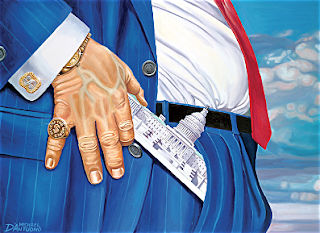 “The Mask Comes Off: Putrefaction Most Foul”
by Fred Reed

“I love it: Donald Trump’s campaign reveals the establishment for what it is, a swamp of corruption  as fetid as those of Latin America. It is better entertainment than Vaudeville. The frantic scramble to rig the primaries, change the rules, and thwart the voters–anything to defend their cozy entanglement of political tapeworms–makes absurd any pretense of democracy.

But it does make sense. The Republicans try desperately to ditch the only Republican candidate who could win the Presidency because… Hillary is one of them. Because, as every sentient being has by now noticed, the Republicans and Democrats are members of the same corrupt club of blood-sucking parasites, the action arm of the corporations, Wall Street, the Israeli lobby, and those who want the US to control the world at any cost–except, of course, to them. They are panicked at the rise of someone who might put first the interests of America. Better Hillary, a fellow parasite, than Trump, who isn’t.

The latest skulduggery is the Virginia governor’s allowing convicted felons to vote. The obvious intention is to increase the black vote for Hillary. In Chicago, the dead vote. In Virginia, the killers. This sort of thing of course explains the support for Trump.

Will  the two parties succeed in blocking the Donald? Might they even resort to the Martin Luther King solution? My powers of political prognostication would be under zero if they could figure out how to get there. If the felony vote and delegate-tampering bring Trump to the convention with only 1236 delegates, and the Republicans broker-in some sad-sack compliant loser, well, the mask will be definitively, openly, for all time off. Welcome to  Paraguay. Which would be only another step in the country’s race toward the Third World.

What would the public do if Trump were robbed of the nomination? What could the public do? There might be protests, mass demonstrations in the streets, but so what? The Insiders’ Club would just wait them out. Once a society realizes that it has no power over its rulers, it lapses into resignation. Republicans do not loot malls or burn cities, and would soon go home. But all the world would see that the Americans have no recourse, that the Insiders do as they please. Welcome to China.

But the mask would be forever off. Very, very off.

And America for what it is: Corrupt to the roots of its teeth. The corruption is adroitly hidden, yes, or disguised as something else. Yet it is there. Consider the subprime disaster. To believe that it was an accident, or a cyclical downturn, or other artifact of econobabble, one has to believe that bankers, realtors, and Wall Street do not understand mortgages, credit, or defaults. You have to believe that officials of the Treasury, who slide back and forth between Wall Street and government like the motion of the tides, had no idea what was going on.

At the top, America is as corrupt as Mexico but American corruption is far more efficient. Among the white middle class, the rot is less. But within the clubhouse of insiders,  at the level of the anointed, of the Adelsons and Epsteins and Clintons and Bushes, there is putrefaction most foul.

It is cleverly done, and seldom involves anything so sordid as open bribery. Yet the results are everywhere. Men who knew exactly what they were doing engineered the student-loan bubble. Yet it is legal, like so many scams. Huge military contracts for things not needed, the near-control of Mid-Eastern policy by Israel, poor medical care at high prices, the deliberate gutting of American industry so that corporations can enrich themselves in China–all of this is legal. You pay Congress and it makes legal anything you want.

Credit cards, which  intentionally lure people into going deeply in debt and paying usurious interest rates, are legal. Big Pharma paid Congress to rule that Medicare cannot negotiate the price of drugs, opening a sluice to the Treasury. Corruption, but legal.

Under the rule of the Insiders Club, medical care is a fecund source of legal graft. Example: I once needed eye drops from Bausch and Lomb called Muro, which amounted to hypertonic salt water. A bottle of 1.8 (I think it was) ounces cost $23 in Washington, $19 in Winchester, Virginia. Exactly the same product in Mexico, $6. Price-fixing, but where and by whom? What Congressmen were paid to make it legal, or not look into it too closely, or at all?

Welcome to Guatemala. Corruption has come to be the purpose of government, and the Club battens on it. You want to see the political equivalent of a public latrine in Uganda? Try HUD, the Department of Housing and Urban Development. I promise that you will be horrified by the diversion of funds and lining of pockets.

You ask, Fred, why do you say this? Are you a student of HUD? No. I know nothing of HUD. I know much of government. HUD  is an outfit with over thirty billion a year to spend, completely unwatched. Have you ever seen a newspaper story about HUD? I guarantee that it is dominated by the sacred ethnic groups who milk it like a prize Guernsey, and by big companies getting sweetheart contracts. Or try Commerce, or Education, or the Bureau of Indian Affairs, or Congress.

It is to preserve these overflowing rice bowls that we have elections without substance between candidates without a difference. Hillary is just Jeb Bush in a dress, Biden a universally applicable cipher, Cruz a compliant applicant for membership in the club. Since the parties collude in avoiding issues that people care about, the contest becomes a popularity contest of the sort found in middle school. Whoever wins, the Insiders win.

“It shouldn’t be a bragging point that “Oh, I don’t get involved in politics,” as if that makes you somehow cleaner. No, that makes you derelict of duty in a republic. Liars and panderers in government would have a much harder time of it if so many people didn’t insist on their right to remain ignorant and blindly agreeable.”
– Bill Maher
Posted by CoyotePrime at 11:40 AM