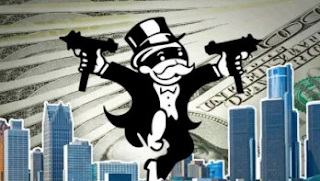 "The crux of the problem, I suggest, is outlined by the following paragraphs: All the "big banks" are overexposed to each other as a result of trading "bad derivatives" paper:

"A rational observer of Wall Street’s serial hubris might have expected some key segments of this letter to make it into the business press. A mere eight years ago the United States experienced a complete meltdown of its financial system, leading to the worst economic collapse since the Great Depression. President Obama and regulators have been assuring us over these intervening eight years that things are under control as a result of the Dodd-Frank financial reform legislation. But according to the letter the Fed and FDIC issued on April 12 to JPMorgan Chase, the country’s largest bank with over $2 trillion in assets and $51 trillion in notional amounts of derivatives, things are decidedly not under control.

At the top of page 11, the Federal regulators reveal that they have “identified a deficiency” in JPMorgan’s wind-down plan which if not properly addressed could “pose serious adverse effects to the financial stability of the United States.” Why didn’t JPMorgan’s Board of Directors or its legions of lawyers catch this?"

Then, a little farther down the page: "How could one bank, even one as big and global as JPMorgan Chase, bring down the whole financial stability of the United States? Because, as the U.S. Treasury’s Office of Financial Research (OFR) has explained in detail and plotted in pictures, five big banks in the U.S. have high contagion risk to each other. Which bank poses the highest contagion risk? JPMorgan Chase."

In other words, folks, the big banks were busily pumping up each other's ledger sheets by trading the credit default swaps/derivative bundles (and bundles of bundles), one key component of which were mortgages (many of them fraudulent), and when the housing bubble burst... well, you know the story.

But now comes a second point in the article, and it's a stunner:

"2. JP Morgan's exposure extends to "foreign jurisdictions" which, in order to "resolve" and :solve" their own exposure, could seize Morgan's liquidity: Apparently, the Federal regulators believe JPMorgan Chase has a problem with the “location,” “size and positioning” of its liquidity under its current plan. The April 12 letter to JPMorgan Chase addressed that issue as follows: “JPMC does not have an appropriate model and process for estimating and maintaining sufficient liquidity at, or readily available to, material entities in resolution… JPMC’s liquidity profile is vulnerable to adverse actions by third parties.

The regulators expressed the further view that JPMorgan was placing too much “reliance on funds in foreign entities that may be subject to defensive ring-fencing during a time of financial stress.” The use of the term “ring-fencing” suggests that the regulators fear that foreign jurisdictions might lay claim to the liquidity to protect their own financial counter-party interests or investors."

Now, all this lovely rhetoric about "third parties" and "foreign jurisdictions" means, effectively, that a kind of banking "mafia wars" looms, with the spectre of a run on banks not by the public, but by other banks, as they seize liquidity to doctor their own derivatives exposure. And if the banks don't do it, "foreign jurisdictions", i.e., those "old fashioned obsolete nation-states" that Mr. Global hates so much, will. And hey, let's give Mr. Rockefeller a pat on the back for his bold vision of a world run by banks and corporations: they're doing a great job, aren't they?

And then comes another whopper doozie:

"3.Dodd-Frank solved nothing: derivatives trades (yes, the very same trade that stacking up a whopping $1.7 quadrillion dollars in paper assets bearing no connection to productive and economy reality) are still traded over the counter. But the OCC has now released four separate reports for each quarter of 2015 showing just the opposite of what the President told the press and the public on March 7. In its most recent report the OCC, the regulator of national banks, states that “In the fourth quarter of 2015, 36.9 percent of the derivatives market was centrally cleared.

Three of the five largest U.S. banks (JPMorgan Chase, Bank of America and Wells Fargo) have now had their wind-down plans rejected by the Federal agency insuring bank deposits (FDIC) and the Federal agency (Federal Reserve) that secretly sluiced $13 trillion in rollover loans to the insolvent or teetering banks in the last epic crisis that continues to cripple the country’s economic growth prospects."

I submit that amid all this by now to-be-expected news of bankster corruption, that it is the second of these three disturbing points that lies at the center of the problem, and is yet another indicator that perhaps the sharks are beginning to circle each other. "Foreign jurisdictions" might be willing to step in and vacuum up what little is left in the cob-web-filled vaults of JP Morgan Chase.

Ok, so where's the high octane speculation in all this? Well, recall my News and Views from the Nefarium from last week, where I advanced the idea that the Panama Papers story, the secret meetings at the Fed with Mr. Obama, Mr. Biden, and Ms. Yellen, the subsequent meetings of the world's major banksters in Washington, and the looming Deutsche Bank crisis, were all connected. But then I also took issue with the major theories being offered for the Panama Papers, of which there are principally two:

(1) The "West" did it, in all its variants - CIA, Pentagon, etc., and...
(2) The Russians did it. I  have taken the view that this is someone else entirely, and that the Panama Papers affair was really about sending messages to all the west's financial elite; they are, so to speak, the "pink slip" that they are about to be "downsized." A third player, in other words, stepped on to the scene, and in so far as the Western media has been concentrating on the Panama Papers, it has done so not because this was part of the "original plan" of its leakers, but rather because they represented a genuine message and challenge, and for those willing to connect dots, presented precisely that "third player" hypothesis. The powers that be could not afford to have anyone entertaining that third  player hypothesis, and hence, decided to kill two birds with one stone, and spin the event as a crisis of opportunity to demonize Mr. Putin once again, thus directing attention away from that "third player" hypothesis.

But now, the FED has obliquely confirmed what I have suspected since 9/11: that a third player has been on the stage, for in its letter to JP Morgan, note that it states "JPMC's liquidity profile is vulnerable to adverse actions by third parties," in the same document that talks about "foreign jurisdictions." To be sure, the two phrases might be referring to the same things, but then again, just as possibly, they might be referring to entirely different things. The bottom line: did the FED just inadvertently confirm the presence of that "third player"?”
- http://gizadeathstar.com/
Posted by CoyotePrime at 11:25 AM