The Economy: "Why Real Reform Is Now Impossible"

"Why Real Reform Is Now Impossible"
by Charles Hugh-Smith

"The endless bleating of well-paid pundits in the corporate media about "reform" is just more circus. It's difficult for well-meaning pundits to abandon the fantasy that meaningful reform is possible. Indeed, a critical function of the punditry and corporate media is to foster the fantasy that the status quo could be reformed if only we all got together and blah blah blah.

As I explain in my new book "Why Our Status Quo Failed and Is Beyond Reform," real structural reform would trigger the collapse of the status quo. (As a reminder, the status quo benefits the few at the expense of the many.) But there's another dynamic that makes reform impossible. I've prepared a chart to explain this dynamic: 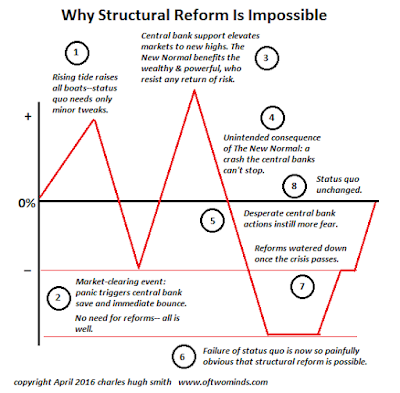 Central banks have transformed the market- in stocks, bonds, commodities and risk-into the signaling mechanism that tells us all is well. Even though the real-world finances of the bottom 95% continue deteriorating, a rising stock market and suppressed measures of risk signal that the economy is doing well. If you're not doing well, it's your personal problem; the status quo is fine and needs only minor tweaks.

Elevating the market into the oracle of economic health creates a systemic risk: If the market tanks, the status quo is called into question. People start asking, is it truly a wonderful arrangement that benefits us all, or is it really just a skimming machine that funnels money and wealth from the many into the voracious maws of the few? Central banks thwart this existential danger to the status quo by rescuing the market every time it approaches the market clearing event level. (see chart) In a market clearing event, risky loans and bets are liquidated, credit dries up, risk soars and the price of assets falls to levels that once again make fundamental sense.

Market clearing events are a necessary part of a healthy credit and asset-allocation system. If the market is never allowed to clear away the dead wood of mal-investments, high leverage, nose-bleed valuations, bad bets and risky loans that should never have been issued, all this dead wood eventually chokes off healthy expansion. The problem for central banks is a market clearing event pushes markets to levels that call the entire travesty of a mockery of a sham status quo into question. That is too dangerous to risk, so central banks quickly defend the fantasy that markets only drift higher, stopping any market clearing event in its tracks.

This leaves the economy increasingly vulnerable to the financial equivalent of an uncontrollable forest fire that burns away all the collected dead wood that has been protected by the central banks. At some difficult to predict point, a random financial flame ignites the accumulated dead wood and the markets are torched in a conflagration so intense not even massive central bank intervention can extinguish the flames.

Structural reform is only possible when markets and sentiment crash far below the market clearing event level. Meaningful reform only becomes politically, economically and socially possible when the status quo has failed so obviously and so painfully that even its most entrenched defenders concedes that the choice has boiled down to either full-blown revolution or meaningful reforms that limit the power of the few at the top of the wealth/power pyramid.

The pyramid by the number of people in each wealth bracket: 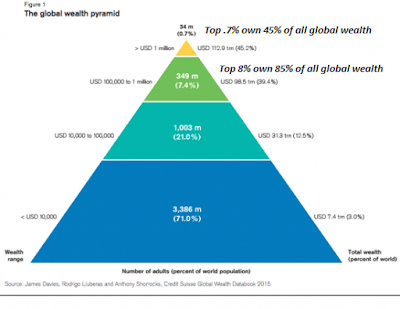 The pyramid by the assets and income held by each wealth/income bracket:

But the process of real reform is quickly hijacked by vested interests once the markets recover back to the market clearing event level. Once the crisis has passed, the well-oiled machine of lobbying, grift, graft and campaign contributions kicks into gear and waters down or co-opts the reforms into PR facades designed to fool the masses into believing the reforms will work as advertised (for example, all the "reforms" passed in the aftermath of the 2009 meltdown: thousands of obfuscating pages of Obamacare, bank regulations etc.)

The only time meaningful reform is possible is in a crisis that reveals the true nature of the status quo, and central banks will create as many trillions of dollars, yen, yuan, euros etc. as are needed to erase that moment of clarity and truth.

The endless bleating of well-paid pundits in the corporate media about "reform" is just more circus designed to distract us from the much colder truth: the status quo is beyond reform. The choice is either collapse or well, collapse: letting the status quo strip-mine the bottom 95% will eventually lead to collapse and so will structural reforms that deprive the few of their power to create near-infinite sums of money and credit for their cronies."
- http://www.zerohedge.com/
- http://charleshughsmith.blogspot.com/
◆
Related:

"America's Entitled (and Doomed) Upper Middle Class"
- http://dailyreckoning.com/
Posted by CoyotePrime at 7:42 AM