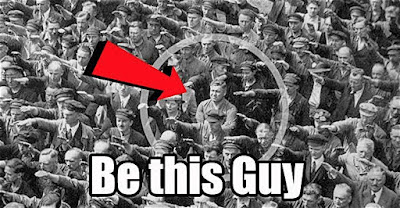 "In what can only be described as one of the most iconic photos of World War II, a lone man, August Landmesser, is seen refusing to be caught up in the nationalistic Nazi fervor, as he stands with his arms crossed, stone faced, as the rest of the crowd engages in the mandatory “seig heil” salute. The salute, meaning hail victory, was an exhibition of loyalty to Adolf Hitler and the Nazi party, and was mandatory for all German citizens.

The photo was taken in Hamburg, Germany on June 13, 1936 at the launch of a naval training vessel. Landmesser can be seen as the lone man pictured refusing to demonstrate his loyalty by saluting. Although the photo itself has become an internet sensation, as it represents those very few people who are willing to think outside of the box into which they have been indoctrinated, few people are aware of the story behind the iconic picture.

Landmesser joined the ranks of the Nazi party in 1931 with anticipation of it creating employment opportunities for him, as the climate in Germany was such that if one wanted to find gainful employment being a party member could be very advantageous. Eventually he was expelled from the party in 1935, after becoming engaged to a Jewish woman, Irma Eckler. The couple was engaged to marry, but enactment of the Nuremberg Laws would prevent that from taking place. The couple’s first daughter was born on October 29, 1935. This series of events fully explains the lack of respect shown by Landmesser, to the Nazi regime, as displayed by his refusal to salute in the iconic photo. But what happened after the picture was taken?

With Eckler pregnant again, the couple decided to flee Nazi Germany for Denmark in 1937, but were caught by the Nazis. Landmesser was subsequently charged with”dishonoring the race” under Nazi race laws. The couple claimed that neither of them were aware that Eckler was fully Jewish, with the couple being acquitted for lack of evidence, but with a warning that any subsequent violations would result in prison time. Even under threat of prison Landmesser and Eckler’s love reigned supreme, with the couple publicly continuing their relationship.

In July of 1938, Landmesser was arrested again, this time being sentenced to two and a half years in the Börgermoor concentration camp. Eckler was taken by the Gestapo to Fuhlsbüttel prison, where she gave birth to her and Landmesser’s second child. Eckler was sent to numerous different concentration camps, with a few letters being received from Irma Eckler until roughly January 1942. It’s believed that she was taken to the Bernburg Euthanasia Centre in February 1942, where she was among the more than 14,000 killed. Landmesser was released from custody in January 1941, working as a foreman. He was eventually drafted into a penal battalion in February of 1944 and was reportedly killed while fighting in Croatia in October of that year."
- http://thefreethoughtproject.com/
Posted by CoyotePrime at 1:47 PM