“‘A Tragic, Dumbass Comedy’: Robert De Niro’s Verdict On Life In The US”

“‘A Tragic, Dumbass Comedy’: Robert De Niro’s Verdict On Life In The US”
by RT

It may sound like the description of his latest movie, but “tragic, dumbass comedy” is actually how Hollywood actor Robert De Niro described life in the US at the moment.  The 'Taxi Driver' star made the remarks during a graduation speech at Brown University in Rhode Island where he was awarded an honorary fine arts degree. 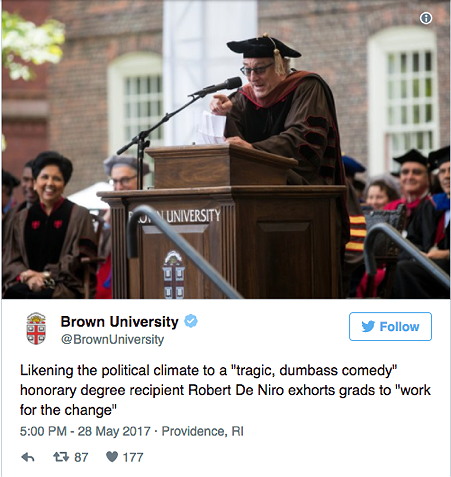 Addressing scores of jubilant students, the 73-year-old asked the crowd: “Are you sure you want to do this? Do you have any idea what has happened to our world in the four years you’ve been here? Well the country has gone crazy. In movie terms, when you started school the country was an inspiring uplifting drama. You’re graduating into a tragic, dumbass comedy.”

He advised that graduates lock the university’s ornate Van Wickle Gates and “stay here.” “But if you do leave, work for the change, work to stop the insanity,” he said. “Start now so the class of 2018 will graduate into a better world. It won’t be easy but you’ll figure it out. You’re Brownians.”
- https://www.rt.com/usa/
Posted by CoyotePrime at 6:01 PM