"A Bitter Winter for US Stocks" 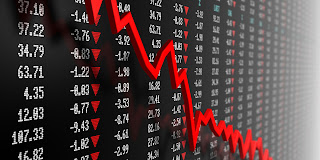 "A Bitter Winter for US Stocks"
by Bill Bonner

"It’s autumn already. A heavy fog covers the farm this morning, the first this year. September can be beautiful here. Not yet cold. But no longer hot. The grass is green, and the sky is clear. Then, in the evening, the horizontal sun filters through the golden leaves and the whole place lights up.

Giving up the fight: Friday, Toys ‘R’ Us went broke. The story is being widely discussed this morning, with the usual mainstream analysts telling us that the bankruptcy was ‘expected’ and that the brick-and-mortar toy retailer was just ‘another victim of Amazon.com’. That is not untrue. But there is an important nuance…

Artificially low interest rates allowed Wall Street hustlers - notably Mitt Romney’s Bain Capital, an investor in Toys ‘R’ Us - to borrow heavily against the company. Apparently, Bain didn’t use this money to build a better Toys ‘R’ Us - strengthening its online presence to compete with Amazon, for example. More likely, it used it as the Wall Street players always do: to pay themselves off. Bonuses, fees, dividends - typically, the private-equity suits take the capital out of capitalism. They move it from the Main Street economy to the financial economy…leaving the poor retailer to struggle to survive. Toys ‘R’ Us gave up the fight yesterday.

Great unwind: This returns us to our promised theme…the Bonner Doctrine…connecting the dots to make sense of the blur we all see. We begin by coming back to Wednesday’s news. That was when Fed chief Janet Yellen confirmed the central bank’s plan to begin lightening its balance sheet. After an eight-year buying spree of government bonds that ballooned the size of its balance sheet from $800 billion to $4.5 trillion, the Fed now says it’s going to go the other direction. It has announced it will shrink its balance sheet at a rate of about $10 billion a month, working up to $50 billion a month next year. If this is true, it represents the biggest turnaround in the history of finance. From the biggest bid holding up the bond market, the Fed is about to turn into the biggest ask pushing it down.

So let’s get this straight. The Fed created $3.6 trillion in new money, and pumped it into the financial markets to buy bonds. (Lowering interest rates, stiffing savers, and making it possible for Toys ‘R’ Us, and many others, to borrow heavily.) This money was apparently responsible for the bull market on Wall Street, boosting the Dow threefold.

It also made it possible for the federal government to add $10 trillion in debt over the last 10 years. Politicians did not have to make any tough choices or difficult compromises; they just had to borrow at the low rates the Fed was creating. And now, after so many years of ultra-low interest rates…and easy credit from the Fed… the whole thing is going into reverse.

Grotesque, monstrous, abominable: Is that right? Instead of acquiring more bonds, the Fed is going to say goodbye to those it already owns. Instead of increasing liquidity in the financial markets, it’s going to decrease it. Instead of quantitative easing, we’ll have quantitative tightening. Wouldn’t it be sensible to expect, therefore, that the effects on the markets would reverse, too? Shouldn’t the ‘yes’ from willing lenders turn into a flat ‘no’? Instead of tripling stock prices, wouldn’t this cut them down to one-third of today’s level? After dropping interest rates to the lowest levels in 5,000 years, shouldn’t they go up?

And instead of a Toys ‘R’ Us economy that depends on fake money lent at fake rates to keep its head above water, shouldn’t the whole goofy system sink?

Isn’t this a major change of seasons, with the bountiful summer that investors have enjoyed since the early 1980s - with the warm central bank breezes from all over the world adding $20 trillion to the planet’s money base - turning into a bitter winter of blustery winds and falling prices?

Yes, dear reader. That’s exactly what you should expect. Get out your winter coat. But as always, there’s more to the story. Do you believe the Fed will follow through with its promise? We don’t. Instead, what we expect is that the Fed will begin its ‘normalization’. Then, at any time, all hell could break loose, with stocks crashing and dozens of Toys ‘R’ Us-style bankruptcies. The authorities will not stay the course. They will run the other way, toward less normalization, and toward the most grotesque, monstrous, and abominable economy the US has ever seen.

What is ‘fake money’? But let us return to the Bonner Doctrine as proposed by a dear reader in last Friday’s Diary. Perhaps you will see flaws we missed. We will also address a question posed by another dear reader: ‘What is fake money?’

•You don’t get something for nothing. A prosperous economy requires real work, real sacrifice (savings), and real investment.
•Real money represents real things - especially time. Real things are limited. Real money must be limited, too. If not, it is fake.
•Real money is earned by real people who produce goods and services of real value. Fake money is conjured up and controlled by insiders in the financial sector, and it is made available at preferential rates to other large Establishment players. Government (or, more broadly, the Deep State), big business, and Wall Street are the main beneficiaries.
•Since 1971, the US has had fake money (not attached to gold). This has been the reserve currency of the entire world financial system. This has misled investors, voters, consumers, and businesses. It causes them to believe things that aren’t true - that they have almost unlimited credit, for example, that they can afford an expensive empire overseas and a costly welfare state at home, or that they can run up debts and grow their way out of them.
•As more and more of the nation’s resources are captured by fake money and directed into unproductive uses - consumption, bad investments, government, war, paperwork, and regulatory compliance - GDP growth, ‘real’ (inflation-adjusted) wage growth, productivity growth, and other markers of genuine prosperity decline.
•All ‘wealth’ created by fake money is fraudulent and/or temporary. Look for it to go back whence it came.

Thinning credit: That is the background economic-monetary outlook. We are in our fourth decade of the fake-money system. And its distortions and corruptions are now catching up to us. It is a system that runs on credit, not on wealth. But the world’s credit is getting thin. Total world credit now exceeds $230 trillion, with about $60 trillion added since the debt crisis of 2008. Since the output of the world is not enough to carry these debts - not to mention the promises made to future retirees* - they will have to be offloaded, one way or another, either by bankruptcy (deflation) or more money printing (inflation).

That is the story we’ve been following for the last 18 years. Meanwhile, there is also politics. It has wound itself about the economy’s neck like a python suffocating a jogger. More on that tomorrow.”
- https://www.marketsandmoney.com.au/
◆
Related:
* "The Ticking Time Bomb That Will Wipe Out Virtually Every Pension Fund In America"
Posted by CoyotePrime at 1:26 AM