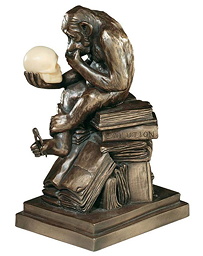 “The development of our cerebral cortex has been the greatest achievement of the evolutionary processes. Big deal. While allowing us the thrills of intellect or the pangs of self-consciousness, it is all too often overruled by our inner, instinctive brain - the one that tells us to react, not reflect, to run, rather than ruminate. Maybe we have gone as far as we can go and the next advance, whatever that may be, will be made by beings we create ourselves, using our own technology. Life forms we can design and program not to be ultimately governed and constricted by the rules of survival. Or perhaps that step forward had already been achieved on another planet by organisms that had a billion years head start on us. If these beings ever visited us, would we recognize what we were seeing? And upon catching sight of us, would they react in anything but horror at seeing such mindless, primitive, hideous creatures?”
- “Fox Mulder,” "The X-Files"
Posted by CoyotePrime at 6:29 PM