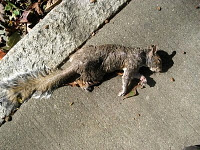 "Matters of Life and Death"
by Chet Raymo

"For the past few days I've passed this poor bedraggled creature on the sidewalk. I cannot help but think of that essay in Lewis Thomas' "The Lives of a Cell" called "Death In the Open." How rare it is, he writes, to see a dead wild animal. He mentions squirrels in particular. They teem in his backyard, he says, all year long, but he has never seen, anywhere, a dead squirrel.

It is always a queer shock, part a sudden upwelling of grief, part unaccountable amazement. It is simply astounding to see a dead animal on the highway. The outrage is more than the just the location. It is the impropriety of such visible death, anywhere. You do not expect to see dead animals in the open. It is the nature of animals to die alone, off somewhere, hidden. It is wrong to see them lying out on the highway, it is wrong to see them anywhere.

Yet here he is, asleep in his own shadow, a reminder - as if any were necessary - that all things die. Everything that comes alive, writes Thomas, seems to be in trade for something that dies. There might be some comfort, he says, in recognizing that "we all go down together, in the best of company."

What is life? The great 19th-century French physiologist Claude Bernard famously (and paradoxically) said "Life is death." He seems to have meant more or less what Thomas said, that everything alive is in trade for something that dies. An even earlier French physiologist, Marie Francois Xavier Bichat, sometimes called the father of modern pathology and histology, gave it a different spin: "Life is the totality of the death-resisting functions."

Two centuries have passed since Bichat's death at age thirty-one, and we are not a lot closer to understanding what life is. The mechanics of the "death-resisting functions" have been marvelously explicated, but the mystery remains. The biologist Lynn Margulis, with her son Dorian Sagan, wrote a big, beautiful book called "What Is Life?" Each chapter ends with the poser "So what is life?", recapitulating the chapter. We get some lovely science, and some lovely writing, but the enigma remains, unless their "Life is evolutionary exuberance" satisfies.

Whatever life is, we recognize it most forcefully in its absence, as here on the sidewalk. And in its absence, we rejoice that, for the moment at least, our own bodies swell with the exuberance that animates the Earth."
-http://blog.sciencemusings.com/
Posted by CoyotePrime at 2:35 PM