"Fighting the Cowardice of Cynicism"

"Fighting the Cowardice of Cynicism"
by Maria Popova

“There is nothing quite so tragic as a young cynic, because it means the person has gone from knowing nothing to believing nothing,” Maya Angelou wrote in contemplating courage in the face of evil. In the decades since, cynicism has become a cultural currency as deadly as blood diamonds, as vacant of integrity and long-term payoff as Enron. Over the years, I have written about, spoken about, and even given a commencement address about the perilous laziness of cynicism and the ever-swelling urgency of not only resisting it but actively fighting it - defiance which Leonard Bernstein considered an essential countercultural act of courage.

Today, as our social and political realities swirl into barely bearable maelstroms of complexity, making a retreat into self-protective cynicism increasingly tempting, such courage is all the harder and all the more heroic. That’s what English writer Caitlin Moran examines in a stirring passage from "How to Build a Girl" (public library) - a novel that quenches questions springing from the same source as her insightful memoir-of-sorts "How To Be a Woman."

Moran writes: "When cynicism becomes the default language, playfulness and invention become impossible. Cynicism scours through a culture like bleach, wiping out millions of small, seedling ideas. Cynicism means your automatic answer becomes “No.” Cynicism means you presume everything will end in disappointment. And this is, ultimately, why anyone becomes cynical. Because they are scared of disappointment. Because they are scared someone will take advantage of them. Because they are fearful their innocence will be used against them - that when they run around gleefully trying to cram the whole world in their mouth, someone will try to poison them."

In a sentiment that calls to mind Descartes’s abiding ideas about the relationship between fear and hope, Moran writes: "Cynicism is, ultimately, fear. Cynicism makes contact with your skin, and a thick black carapace begins to grow - like insect armor. This armor will protect your heart, from disappointment - but it leaves you almost unable to walk. You cannot dance in this armor. Cynicism keeps you pinned to the spot, in the same posture, forever."

A century and a half after Van Gogh reflected on fear and risk-taking, arguing that “however meaningless and vain, however dead life appears, the man of faith, of energy, of warmth… steps in and does something,” Moran echoes Angelou and adds: "The deepest irony about the young being cynical is that they are the ones that need to move, and dance, and trust the most. They need to cartwheel though a freshly burst galaxy of still-forming but glowing ideas, never scared to say “Yes! Why not!” - or their generation’s culture will be nothing but the blandest, and most aggressive, or most defended of old tropes."

When people are cynical, and snarky, they shoot down their own future. When you keep saying “No,” all that’s left is what other people said “Yes” to before you were born. Really, “No” is no choice at all.

Complement with Rebecca Solnit on resisting the defeatism of easy despair, Jonathan Lear on radical hope, and Toni Morrison on rising above fear in troubled times."
- https://www.brainpickings.org/
◆ 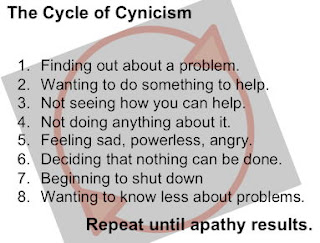 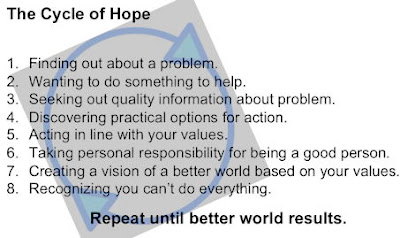 Posted by CoyotePrime at 9:20 PM