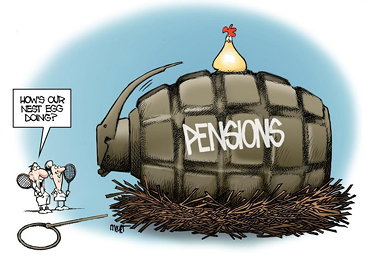 "The coming pension and unfunded government liabilities storm is so big that many of us simply can’t get out of the way, at least not without great difficulty. This holds true not just for the US but for almost all of the developed world. I did a lot of thinking after we published last week's Thoughts from the Frontline about the coming pension tsunami (subscribe here for free)- especially as I was reading your comments- and I wished I had made my warning even more alarming.  So here I am, banging the same drum.

Getting back to the topic, we’re all trapped on small, vulnerable islands. Multiple storms are coming, and evacuation is not an option. All we can do is prepare and then ride them out. And we all have some very important choices to make.

It Will Be Every Man for Himself: Although I’m known far and wide as “the Muddle Through Guy,” the state and local pension crisis is one that we can’t just muddle through. It’s a solid wall that we’re going to run smack into. Police officers, firefighters, teachers and other public workers who expect to receive the promised retirement benefits will be bitterly turned down. And the taxpayers will complain vigorously if their taxes are raised beyond all reason. Pleasing both those groups is not going to be possible in this universe.

So what will happen? It’s impossible to say, just as we don’t know in advance where a hurricane will make landfall: We just know enough to say the storm will be bad for whoever is caught in its path. But here’s the twist: This financial storm won’t just strike those who live on the economic margins; all of us supposedly well-protected “inland” folk are vulnerable, too. The damage won’t be random, but neither will it be orderly or logical or just. It will be a mess.

Some who made terrible decisions will come out fine. Others who did everything right will sustain severe hits. The people we ought to blame will be long out of office. Lacking scapegoats, people will invent some. Worse, it will be a local mess.

Imagine local elections that pit police officers and teachers against once-wealthy homeowners whose property values are plummeting. All will want maximum protection for themselves, at minimum risk and cost. They can’t all win. Compromises will be the only solution- but reaching those unhappy compromises will be unbelievably ugly. In the next few paragraphs I will illustrate the enormity of the situation with a few more details, some of which were supplied this week by readers.

The Problem Is Reaching a Critical Point: Let’s look at a few more hard facts. Pension costs already consume more than 15% of some big-city budgets, and they will be a much larger percentage in the future. That liability crowds out development and infrastructure improvement, not to mention basic services. It forces city leaders to raise taxes and impose “fees.” Let me quote from the always informative 13d letter (their emphasis): Consider the City of Los Angeles, which Paul Hatfield, writing for City Watch L.A., recently characterized as being in a state of “virtual bankruptcy.” After a period of stability going back to 2010, violent crime grew 38% over the two-year period ending in December 2016. Citywide robberies have increased 14% since 2015. One possible reason for this uptick: the city’s population has grown while its police department has shrunk. As Hatfield explains:

The LAPD ranks have fallen below the 10,000 achieved in 2013. But the city requires a force of 12,500 to perform effectively. A key factor which limits how much can be budgeted for police services is the city’s share of pensions costs. They consume 20% of the general fund budget, up from 5% in 2000. It is difficult to increase the level of service while lugging that much baggage.

What about subway service in New York City? The system is fraying under record ridership, and trains are breaking down more frequently. There are now more than 70,000 delays every month, up from about 28,000 per month five years ago. The city’s soaring pension costs are a big factor here as well. According to a Manhattan Institute report by E.J. McMahon and Josh McGee issued in July, the city is spending over 11% of its budget on pensions. This means that since 2014, New York City has spent more on pensions that it has building and repairing schools, parks, bridges and subways, combined."

There are many large, older cities where there are more police and teachers on the pension payroll than are now working for the city. That problem is compounding, as those workers will live longer, and the pensioners typically have inflation and other escalation clauses to keep their benefits going up.

Further, most cities do not account for increases in healthcare costs (unfunded liabilities) that they will face in addition to the pensions. Candidly, this is just another “a trillion here, a trillion there” problem. Except for the fact that the trillion dollars must be dug out of state and local budgets that total only $2.5 trillion in aggregate. Now, add in the near certainty of a recession within the next five years  (and I really think sooner) and the ongoing gridlock in national politics, plus the assorted other challenges and crises we face. I won’t run down the full list- you know it well. I just have to wonder, WTH are we going to do?”
- http://www.marketoracle.co.uk/Article60335.html
Posted by CoyotePrime at 1:15 AM