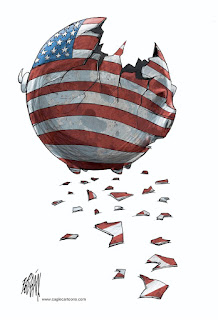 "From comedy…to farce…to tragedy. We laugh. We guffaw. And then we wish we hadn’t bought a house in inner-city Baltimore. Already, in Charm City, police helicopters peer into our windows…sirens wail at 3:00am.…and the monuments to our dead ancestors disappear in the night. What will happen when the real crisis comes, when the debts come due, and the feds can no longer afford to pay off their crony friends and zombie clients?

ZIP code politics: Where you stand on the important issues depends largely on where you sleep. If you live in a ZIP code favored by the Deep State - most of which are on the two coasts - you are likely to approve of the system and disapprove of anyone who threatens to shake it up. Your stocks are up. Your house is up. Your café latte and Pinot Grigio are waiting for you. You may have even voted for Hillary and counted on her to keep the good times coming.

If you live in a ZIP code in ‘flyover country’, on the other hand, you may see things differently. A report from the Economic Innovation Group think tank: ‘One in six Americans lives in an economically distressed community. In total, 52.3 million individuals live in economically distressed ZIP codes. Such communities can be found in every region of the country and in rural areas, suburbs, and city centers.

Perhaps most troubling, the prime years of the national economic recovery bypassed many of America’s most vulnerable places altogether. Far from achieving even anemic growth from 2011 to 2015, distressed communities instead experienced what amounts to a deep ongoing recession, with a 6% average decline in employment and a 6.3% average drop in business establishments.’

The Bonner & Partners research department, headed by Joe Withrow, is on the case. He’s checking the figures, county by county. And the picture is worse than we thought. Remember, the system runs on credit. And the feds (with their crony friends on Wall Street) control where the credit goes. Not surprisingly, it ends up in their bank accounts, investments, enterprises, and salaries - in big businesses and boondoggles around the big megalopolises on the East and West Coasts.

If Washington calculated inflation, wages, and employment honestly, we would see that most of the rest of the US has been in a near-depression for the entire 21st century. Stay tuned…

Headed for bankruptcy: In the meantime, we read the news along with everyone else. We are amused, and often appalled. After much meditation, reflection - and singing maudlin songs to two kittens (one of whom finally showed up after sleeping rough out in the garden) - we have laid out our ‘Bonner Doctrine’. We summarize:
•The economy has been weakened by politics – more and more win-lose deals imposed by the feds.
•The government is controlled by insiders who benefit from those deals; the last thing they want is change.
•As a result, the US empire is headed to bankruptcy…or to Hell. It would take a remarkably talented and determined leader to alter the direction of the march.

Donald J Trump will not do that job; instead, he busies himself on Twitter to keep his fans distracted.

Entitlements are never brought under control. (The latest attempt to reform O’care failed yesterday.) Expensive wars continue, with no hope of victory, and no end in sight. (The junta of generals - Mattis, McMaster, and Kelly - controls US foreign policy.)

One regulation is updated, another is amended. One crony gets a payoff, another, who has bet on the wrong politician, waits for the next election. One tweet tells us NFL players are bad guys. Another tells us NHL players are good guys. Kneeling is bad. Locking arms is okay. How does POTUS know these things?

Debt and dissatisfaction: And all the while, debt and dissatisfaction mount up. Once the debt ceiling was pushed out of the way - a collaborative effort between the president and the Democratic wing of the Deep State - it was off to the races. Federal debt shot ahead to over $20 trillion just hours later.

The fundamental problem, or at least the thing that makes the fans squirm and causes the show to turn from a farce to a tragedy, is that time and resources are limited. You either do win-win deals, which help people get what they want, or at least get what they’ve got coming. Or you do win-lose deals, which reward the few at the expense of the many. The richer, fatter, and sassier the insiders become, the more the rest of us are out of pocket.

Most people aim to get what they want from voluntary win-win deals in the Main Street economy. But the Swamp (insiders, Deep State, Establishment Republicans and Democrats) relies on win-lose deals. Want to know why the economy has slowed down, and wages no longer rise? The simple answer: A half-century ago, the feds controlled about one-quarter of the economy. Now, they’ve got about half of it under their thumbs. And fake money, too!”
- https://www.marketsandmoney.com.au/
Posted by CoyotePrime at 12:49 AM