“Can You Live Well on Social Security Alone?” 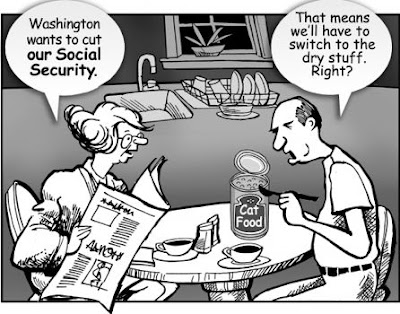 “Can You Live Well on Social Security Alone?”
by Bill Bonner

"Can you live well on Social Security alone? Yesterday, we told an old friend it was possible. But is it? It depends on what you mean by ‘living well’.

Rich and poor: Today, we lift anchor and unfurl the sails. We’re going to explore a faraway land. We catch a breeze to go have a look not at money, but at the lack of it. We’re headed off to find out if money contributes much to the ‘good life’. A subtext: We’d like to find an island somewhere where we could live happily without it.

As long-time readers of this Diary know, your editor has been rich and poor. Growing up, he was the poorest white man he knew. Later, he was a beneficiary of forces beyond his control - the information revolution and the fake-money system. The internet came along in the 1990s and allowed him to eliminate the biggest expenses of his newsletter business: paper and postage. Then the fake-money system pushed baby boomers to invest their money. They wanted advice; many turned in your editor’s direction.

Although he merits no praise for accidentally being in the right place at the right time, nor does he deserve to get any grief for it. But now he finds himself getting both. As one of the rich, hated, and greedy ‘One Percent’, the liberal press rails against him. Simultaneously, the Republicans hail him as a ‘job creator’…and want to make him richer! And he wonders: What’s the diff?

Not worth the nickel: There are two things money can do for you: It can buy comfort and/or status. To make a long story short: Neither is worth the nickel, so to speak. As for comfort, it is easily attained. And cheaply. In the wintertime, we sit before an open fire. It costs almost nothing. But it warms our hands and our heart. On the bed is an electric blanket for cold nights. What more do we need? In the summer, it’s hard to beat sitting on the porch…or under the beech tree. Yes, we have air conditioning in the house and the office. But it is not expensive if used in moderation. What else do you need?

Clothes can be simple and almost absurdly cheap…especially if they are ‘pre-owned’. And good food? A well-tended garden can provide much of what you need. We had an uncle who was such a good gardener, he got almost all his fruits and vegetables from his own plot.

The rest of our comforts don’t have to be expensive, either. We have an old Chevy pickup truck that runs fine. It is an antique, but not valuable, so insurance and licenses are remarkably cheap.

Thought and feeling: So let us turn to the other thing money can buy: status. We need little for survival: food, clothing, and shelter from the cold wind. But our want of status is infinite. Fortunately, it is also remarkably flexible. One man gains status by buying a new Jaguar; another finds it in keeping his old Honda on the road. One looks for status by going to fancy restaurants; another moves up a notch by growing his own asparagus. One joins President Trump’s Mar-a-Lago club; another joins a church.

The trick to enjoying poverty is to flip the status symbols in your direction. It is not enough to do without; you have to feel superior about it. Wear your Kmart duds as a badge of honor.

And to help you, we dig into Clive Bell’s classic essay, "Civilization". Bell, an English art critic associated with the Bloomsbury Group, maintained that civilised people care little for comfort or money. They aim for a higher form of status; one you can’t measure in dollars: ‘The life of an Athenian, so rich and complex in thought and feeling, was in most material blessings indecently deficient. The richest citizens seem often to have slept on the dining-room chairs - to be sure they were more like benches almost - wrapping themselves up in their ulsters like so many third-class passengers. The houses of the Athenians were small, unpretentious, and devoid of labor-saving devices. The furniture and utensils would have provoked the patronizing pity of moral indignation of a class-conscious dustman.’

In the days of the ancient Greeks, for example, some of the greatest thinkers of all time got drunk and simply laid their cloaks down on the stone floor and went to sleep. (See Plato’s "Symposium".) It is not that ancient Greeks were indifferent to status; they were as prey to vanity and snobbism as anyone. But they gained it, as Bell points out, not by money, but by ‘thought and feeling’. Artists, poets, philosophers - all were revered if they were good. That they had money or not was entirely inconsequential. A great sculptor gained status…and then, as rich people coveted his work, he gained money, too. But the status came from the art, not the money.

Shortcut to status: In America, no one is sure where the money comes from, especially in this Fin de Bubble Epoch. So it tends to be taken - in itself - as a status symbol. The boor…the numbskull…the jackass - all are held in high regard if they bought bitcoin early. Money is a shortcut to status, and a cheap substitute for thought and feeling.

The rich man can’t be bothered to find a house with real grace or charm; instead, he buys an expensive one. He may not know the difference between a Barolo or a Beaujolais on the left side of the menu; but he can read the numbers on the right. He hasn’t the time to think or feel; he is too busy earning money.

The trouble with money for measuring status is the same as having money as a foundation for an economy. You can add it up. Numbers give you the quantity of beer bottles consumed or sleeping pills manufactured. But numbers do not tell you anything about the quality of the beer or the peacefulness of the sleep.

The rich man ends up living in a ghastly monstrosity, talking nonsense, and acting like a brute. His money raises him up above the rest of his countrymen. But he is put on a pedestal only to be laughed at by people of real taste or judgement. ‘Thought and feeling’ can’t be calibrated in money. They are qualitative, not quantitative. Sometimes, money can help provoke thoughts and cultivate feelings. Sometimes, it just gets in the way."
- https://www.marketsandmoney.com.au/
Posted by CoyotePrime at 1:57 AM