"More Than A Feeling" 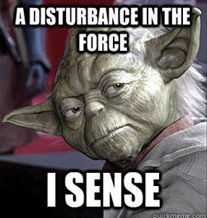 "More Than A Feeling"
by Grog

“When I’m tired and thinking cold
I hide in my music, forget the day
And dream of a girl I used to know
I closed my eyes and she slipped away”
- Tom Scholz

"I know this is more than slightly off topic for the situational questions of the times, but I cannot help but wonder if others are getting some of the same vibes I have been getting. I cannot quite put my finger on it. The closest reference to what I am trying to get through is the notion of political discussion at Thanksgiving. I saw more than a few articles about how it may be a good idea to keep one’s thoughts to one’s self, especially political/cultural ones. What I am feeling is an absence of something, not a presence. Little things are out of place, the background noise attenuated or absent.

Many times in the course of business, one picks up on behaviors and endeavors of those in sales and technical support with companies one deals with. After some time, it is not unusual to know that they like to garden, or boat, or enjoy sports and any of several pastimes. I find that now the idle banter is kept to a minimum.

At first I thought that perhaps business was getting more competitive and ‘tighter’, less time to spend and more sales to make. But then, I noticed that this trend, if I can even call it that, extends to forays to my favorite and local hardware store. Guys that I have known for years are suddenly desultory in conversation.

There has been one noticeable exception. Last week I was the local barber. At first nothing was uttered except for the usual “how ya doin’ today?”. There was a song playing on the radio, a country song. I used to like some country music but not so much now. To me the artists sound similar to other country music artists in style etc. However, I have seen recent reference to a country song rising sharply in the charts. The song is “Take a Knee, My Ass”. I asked Scott, the barber, if he had heard that song. My guess is that he understood the reference of the song.

I was surprised. He. Exploded. He was apoplectic. Through the spray of spittle and red faced rage, the fragments of intelligible words I could understand had to do with honoring Vets. “Moral outrage, how dare those bastards” That example is not what I am referring to. I’d call it a “close but no cigar” response.

I sense fear. I sense dread. I sense angst. But most of all I can almost smell the acrid metallic pungency of blood.

“When people have nothing left to lose, they lose it.” - Gerald Celente

“The most dangerous creation of any society is the man who has nothing to lose.” - James A. Baldwin

Have you ever seen the face of a guy when he is calmed, his eyes focus intently and you realize that you are about to break the skin on his knuckles with your face? No noise, no warning, just that look, that feeling you get. Then, the knuckles. That’s what I’m feeling now. No, not the knuckles, the calm. White noise fades to soundlessness. “Then it all came rushing back to me like the hot kiss at the end of a wet fist.”

Maybe I’m becoming deaf?
Maybe I am a Cricket?
What do you think?
“Daddy, are we there yet?”

“The earliest documented case of unusual animal behavior prior to an earthquake is recorded by the Roman historian Aelian in 373 B.C.; five days before an earthquake destroyed the city of Helike (once located at the coast of the Corinthian Gulf) various animals, like rats, weasels, snakes, centipedes and bugs supposedly emerged from the underground and fled from the city. In the following centuries many other cultures associated earthquakes with animals.”
- https://www.theburningplatform.com/
○
In "Star Wars" it was called a "disturbance in the Force." If you put your ear on a railroad track you can hear/sense the vibrations of a distant train approaching. There IS "something" that many of us are instinctively sensing subconsciously, something out there in the dark, and it's not good, and it's coming this way... Do you  feel it?
○
"Here’s Why You’re Sensing a Disturbance in the Force”
- http://www.talknetwork.com/
Posted by CoyotePrime at 11:22 AM

Email ThisBlogThis!Share to TwitterShare to FacebookShare to Pinterest
Labels: Grog