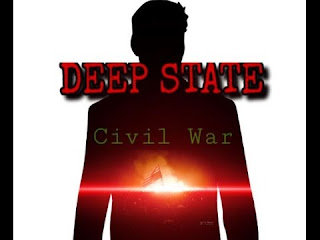 "It now seems evident that the Neoliberal Camp of the U.S. Deep State is highly vulnerable on an individual basis. I tend to notice things like a year-old blog entry suddenly getting thousands of page views. The essay that received a surge of recent interest: "Is the Deep State at War - With Itself?" (December 13, 2016). Please view that article, as nothing has emerged to change the conclusions.

That in itself reveals that the internecine war within America's Deep State is if anything heating up as those attempting to hang a "Russian collusion" narrative on their Deep State opponents have failed to produce any proof of this collusion despite a year of effort.

Then all of a sudden big political donor Harvey Weinstein gets taken down for behaviors that have been well-known within the circles of power for 20+ years. So what changed? Why did Mr. Weinstein's protective wall suddenly fail after serving him so effectively for decades? But Mr. Weinstein was only the first to fall. Now high-profile figures across the mainstream media are toppling like dominoes. Doesn't it seem a bit peculiar that all these Protected Privileged are suddenly being exposed, disgraced and removed from positions of influence and power?

Maybe it's just random coincidence, but I doubt it. It has the scent of an intentional covert campaign. It's well known that the mainstream media and Hollywood has been in bed with the security agencies for decades, and so it seems non-random that suddenly all these big-shots have lost their Protected Privileged Status more or less at once.

Not to put too fine a point on it, but it looks like those who played on the losing side's team (or cheered from the sidelines) just had their privileges revoked.

Were we to speculate on the meaning of this first-sweep of the media: how about a campaign to strip the failed narrative of its media supporters? Now that everyone sees the lay of the land, the Second Stage will be to collect all the dirty laundry that's been hidden away out of fear, and then methodically expose, disgrace and remove the next layer of media/entertainment supporters of the failed narrative.

Stage Three will be to collect and release the same sort of evidence against the political class. We can discern evidence for this campaign in the number of candidates who suddenly declare they won't be running for re-election for personal reasons, or to "move on to other projects," etc.

As this campaign moves up the wealth-power pyramid, we'll see more big shots resigning or retiring. Those that resist will find all their dirty laundry is suddenly being made public.

Isn't it interesting that PBS and the rest of the mainstream media went all out to support Hillary Clinton's recent media campaign to revive the "Russian collusion" narrative via her new book, yet the campaign fell flat with the American public? This is remarkable: a highly coordinated, massive media campaign failed to re-energize the "Russian collusion" narrative, and may have actually backfired by drawing renewed interest in Russian dealings with the Clinton Foundation during Hillary's term as Secretary of State.

I hesitate to draw a military analogy, but it certainly feels like a replay of the Battle of Midway, in which an over-confident Japanese Imperial Navy was poised to declare victory until the cream of its fleet, four aircraft carriers, were sunk or disabled in the space of a few moments by U.S. Navy dive bombers.

The grand attack that was supposed to reverse these catastrophic losses - Hillary's book and accompanying media blitz - fizzled, and that failure clearly eroded the defenses of those who supported this counter-attack by the demoralized but still powerful Neoliberal Camp of the Deep State.

It now seems evident that the Neoliberal Camp of the U.S. Deep State is highly vulnerable on an individual basis: all too many over-confident big-wigs appear to have counted a bit too much on their Protected Privileged Status being permanent. Collectively, they appear to have forgotten, perhaps as a result of their titanic hubris, that only the paranoid survive.

Various cliques within the 3-Letter Agencies are frantically trying to protect their satraps and benefactors, but the tide has turned and all the threats and pay-offs that defended the Protected Privileged so effectively for decades are no longer working. Now the Protected Privileged are running scared, as well they should, for the opposing camp within the 3-Letter Agencies has all the dirty laundry it needs to bring down the Neoliberal Camp, one disgraced big-shot at a time.

The way of the Tao is reversal.”
- http://www.oftwominds.com/blog.html
Posted by CoyotePrime at 9:45 PM