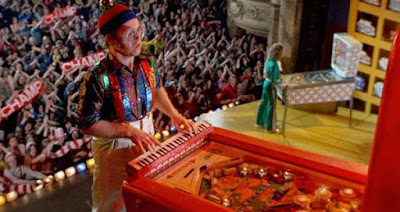 "Anyone who’s ever played a pinball machine can attest to the fact that the player easily becomes wrapped up in it, to the point of the exclusion of all else happening around him. He hits the flippers rapidly, glancing up from time to time at his increasing score. It becomes irresistible to jiggle the table frequently, in an effort to get the ball to go where the player wants it to go. And, of course, every player is familiar with the disappointment that comes when he’s overplayed his body English and the machine stops suddenly, lighting up a sign that says, “Tilt! Game Over.”

Much of the world is now embroiled in an economic game similar to pinball. The stakes are becoming ever greater, the flipper buttons are being pressed ever faster, and those who are desperately attempting to keep the collapsing system going are shoving the table ever more recklessly. At this point in the world economy, the number of possible triggers that could take the system down is growing ever more rapidly.

And, for those who are paying attention, the list of dominoes that we’ll see fall is becoming ever more starkly apparent. Let’s have a look at just some of the more basic dominoes:

•Creditor countries dumping US Treasuries back into the US market. (This has already begun and will continue until the dollar crashes.)
•Cessation of the US dollar as the petrodollar. (This is about to begin, but will take several years to play out fully.)
•Economic sanctions by the US against Russia and China (that are unlikely to have the support of the US’s allies).
•Implementation of tariffs, resulting in a tariff war.
•A rise in interest rates (as was consciously created in 1929 by the Fed in order to trigger a timed crash).
•Bursting of the bond market bubble.
•A major stock market crash.
•Dramatic increase in mortgage defaults.
•A spike in commodity prices, coinciding with a drop in asset values (inflation and deflation at the same time - the worst possible combination).
•Collapse of the paper gold market.
•A switch to the new IMF cryptocurrency and a major effort to end the use of cash. (This will succeed to some extent, but will create a worldwide monetary black market.)
•US defaults on its debt. (This, too, will occur over several years.)
•Collapse of the dollar.

Many of these events will be black swans. As can be expected, some of the events will be sudden, whilst others will take time to play out. In addition, although they’re likely to occur roughly in order, several will be in play at any given time. Although each of these events can be anticipated, they won’t come with warning notices. Their actual occurrences will be unheralded. (As an example, when a stock market crash occurs, investors will wake up to discover that it’s occurred whilst they were sleeping.)

And, just as in pinball, the end of the game will come quite suddenly. The moment that the player will know that it’s “Game Over” will be when he goes to his ATM and finds that the screen is dark. The machine has been made inoperative overnight. Annoyed, he’ll go to the next-nearest ATM, but will find that that one, too, is shut down. He’ll go to others and, at some point, will realize that they’re all shut down.

Without spending cash in his wallet, he’ll then go to the local gas station or supermarket and attempt to pay with his credit cards but will find that they’ve all been made inactive. In trying to sort out the problem with the manager, he’ll be told that all credit cards for all his customers have been denied that day.

The realization will suddenly hit that money has ceased to flow. For how long? The television news programs will state that it will be temporary, but they don’t define “temporary.” Those few individuals who understood that an economic crisis was brewing will take inventory of how much cash they have remaining in their wallets and how much they’ve stashed at home, and realize that this total now represents their total purchasing power.

Overnight, wealth is no longer measured in saleable assets, since, if virtually no one has spending money, they have no means of payment. Therefore, the fellow who thought that, if he found himself in a pinch, he could always sell the Harley in the driveway, or perhaps the family boat, for some quick cash, can no longer locate a buyer who can pay him - at any price.

Of course, many people will do all they can to contact their bankers, demanding that they be allowed to remove their money on deposit and extract the contents of their safe deposit boxes, but they’ll receive a recording, saying, “We’re sorry for the inconvenience, but the bank will be temporarily closed until further notice.” At this point, “wealth” will change its definition to include only the cash in hand, plus whatever might be bartered.

Recently, I received an email from an associate in Canada, who asked, “When will I know when I really have to make a move?” My answer was, “You won’t. But there will be an actual day when you’ll know that you’ve waited too long and it’s now too late. That day will be the day that you visit the ATM and find it closed.” That’s it. “Game Over.”

So, are we all doomed? Well, no, not at all. Those who are proactive can remove themselves from the system now, before the system reaches the “Tilt!” If the reader lives in one of the jurisdictions that’s likely to be the most impacted (EU, US, Canada, etc.), he would be wise to liquidate his possessions there and move the proceeds to a jurisdiction that’s less likely to be impacted and which has a long reputation for economic stability. He should place his wealth (no matter how great or little) in precious metals and real estate overseas - again, in a safer jurisdiction.

He should retain some money (in cash and precious metals) at home, or nearby—enough to cover a few months’ expenses. If he can afford to, he should then create a bolt-hole in a jurisdiction that he can go to quickly, should the crisis overtake him.

However, even those who recognize that their home country may soon become an economic prison camp are likely to dither, failing to prepare adequately. Sadly, they’re likely to find themselves in the position of the fellow in the photo above, discovering that “Game Over” has arrived before he could ready himself.”
- http://www.zerohedge.com/
Posted by CoyotePrime at 8:19 AM