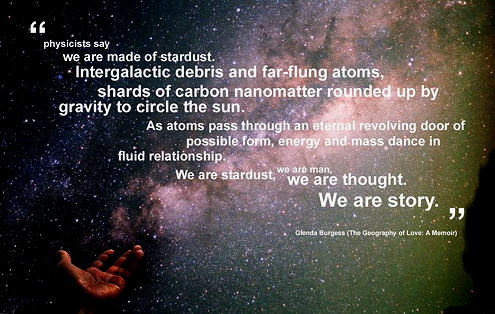 "In a sense, human flesh is made of stardust… Every atom in the human body, excluding only the primordial hydrogen atoms, was fashioned in stars that formed, grew old and exploded most violently before the Sun and the Earth came into being. The explosions scattered the heavy elements as a fine dust through space. By the time it made the Sun, the primordial gas of the Milky Way was sufficiently enriched with heavier elements for rocky planets like the Earth to form. And from the rocks atoms escaped for eventual incorporation in living things: carbon, nitrogen, oxygen, phosphorus and sulphur for all living tissue; calcium for bones and teeth; sodium and potassium for the workings of nerves and brains; the iron coloring blood red, and so on. No other conclusion of modern research testifies more clearly to mankind’s intimate connections with the universe at large and with the cosmic forces at work among the stars."
- Nigel Calder,
"The Key to the Universe," BBC, 1977
Posted by CoyotePrime at 1:35 AM