Chet Raymo, “The Spare And The True” 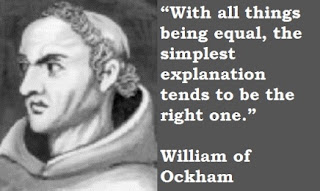 “The Spare And The True”
by Chet Raymo

“Twice during the past few years, someone has alerted me to quotes from my Globe columns in the American Heritage Dictionary (4th ed.), illustrating the use of words. For spacefaring, the dictionary cites my reference to "spacefaring nations." For exotic, 2. Intriguingly unusual or different; excitingly strange, the dictionary cites my observation "If something can be explained simply, in a familiar way, then it is best to avoid more exotic explanations."

Now that pleases me. I contributed Ockham's Razor to the American Heritage Dictionary! One of the most useful and fruitful philosophical principles ever devised. You have seen it floating through all these years of posts like a guiding spirit. Always on the lookout for the simplest, most natural explanation. Parsimony. Economy.

William of Ockham was a 14th-century English Franciscan friar and philosopher, from the tiny village of Ockham in Surrey (the village still lies just beyond the sprawl of metropolitan London, probably not all that different today than it was in William's time). He was educated at London and Oxford, and preached and taught across Europe. He was not the first to enunciate the principle of parsimony, but he wielded the razor to great advantage, shaving away superfluous accretions from the philosophy and theology of his time, an exercise that ultimately earned him excommunication from the Church he served- a Church that then and now seems to delight in conceptual excrescences.

Someone once quoted Shakespeare to the philosopher W. V. O. Quine: "There are more things in heaven and earth than are dreamt of in your philosophy." The remark was meant as a put-down of sorts: "Yeah, Mr. Quine, so what do you know?" To which Quine is said to have responded: "Possibly, but my concern is that there not be more things in my philosophy than are in heaven and earth."
- http://blog.sciencemusings.com/
◆ 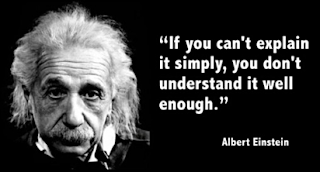 Posted by CoyotePrime at 7:16 PM