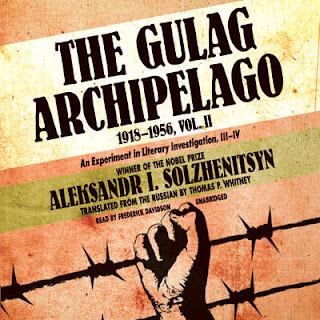 “If only there were evil people somewhere insidiously committing evil deeds, and it were necessary only to separate them from the rest of us and destroy them. But the line dividing good and evil cuts through the heart of every human being. And who is willing to destroy a piece of his own heart? During the life of any heart this line keeps changing place; sometimes it is squeezed one way by exuberant evil and sometimes it shifts to allow enough space for good to flourish. One and the same human being is, at various ages, under various circumstances, a totally different human being. At times he is close to being a devil, at times to sainthood. But his name doesn't change, and to that name we ascribe the whole lot, good and evil. Socrates taught us: 'Know thyself!'”

"To do evil a human being must first of all believe that what he’s doing is good, or else that it’s a well-considered act in conformity with natural law. Fortunately, it is in the nature of the human being to seek justification for his actions. Macbeth’s self-justifications were feeble – and his conscience devoured him. Yes, even Iago was a little lamb too. The imagination and the spiritual strength of Shakespeare’s evildoers stopped short at a dozen corpses. Because they had no ideology.

Ideology – that is what gives evildoing its long-sought justification and gives the evildoer the necessary steadfastness and determination. That is the social theory which helps to make his acts seem good instead of bad in his own and other’s eyes, so that he won’t hear reproaches and curses but will receive praise and honors. That was how the agents of the Inquisition fortified their wills: by invoking Christianity; the conquerors of foreign lands, by extolling the grandeur of their Motherland; the colonizers, by civilization; the Nazis by race; and the Jacobins (early and late), by equality, brotherhood, and the happiness of future generations.

Thanks to ideology, the twentieth century was fated to experience evildoing on a scale calculated in the millions. This cannot be denied, nor passed over, nor surpressed. How, then, do we dare insist that evildoers do not exist? And what was it that destroyed these millions? That is the precise line the Shakespearean evildoer could not cross. But the evildoer with ideology does cross it, and his eyes remain dry and clear."
- Aleksandr Solzhenitsyn