"This Has Predicted Every Market Crash in History" 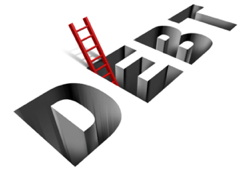 "This Has Predicted Every Market Crash in History"
by Bill Bonner

"As expected, the stock market seems to be on the mend. After the scare of two weeks ago, prices are firming. And the Fed is giving the economy the all-clear. Bloomberg: ‘“Beyond full employment” is a phrase that needs explanation. We take it to mean the Fed has gone bonkers. But we’ll elaborate on that another day.’ The US labor market is near or beyond full employment, (What?! What drugs are they taking? - CP) while some pockets of finance are showing signs of rising leverage and high valuations, according to a Federal Reserve report.

Today, we’re merely trying to get back on schedule after a snafu that left us stuck in Miami International Airport at midnight last night. (As we type, it is about 7:00am…) Yes, our travel plans got more than fully messed up. And now, we are way beyond completely ready to move on.

Watch rising rates: But back to our beat of the markets… ‘Buy the dip’ has worked for the last 38 years. And now, investors are more than 100% convinced that it will work again. But they are wrong. Even super-investor Warren Buffett — famous for not looking at the big picture - has his eyes wide open. Here’s an extract from his latest letter to shareholders of his investment firm, Berkshire Hathaway:

‘Fundamental investors like to pronounce they don’t think about macroeconomics. It’s all about researching companies, they say. We’re with you, brothers and sisters. However, if there was one economic chart to pay attention to, the one presented below of changes in the Fed’s discount rate is it. 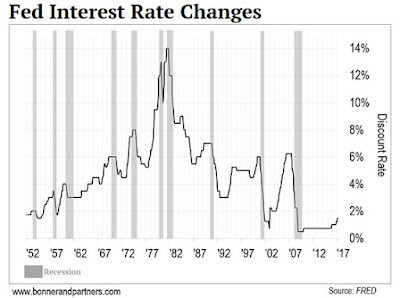 Going back to 1950, every U.S. recession (grey shaded area)
has been preceded by the Fed hiking interest rates.

‘Every major stock market decline and every recession in the last 100 years was preceded by the Federal Reserve raising short-term interest rates by enough to provide the pin to prick the balloon.

Note the emphasis on every. Yes, there have been periods where the Fed raised rates and a recession didn’t ensue. Everyone knows the famous saying about the stock market having predicted nine of the past five recessions! That may be true, that rising rates don’t necessarily cause a recession. But as an investor, you must be aware that every major stock market decline occurred on the heels of a tightening phase by the Fed. More importantly, there have been no substantive Fed tightening phases that did not end with a stock market decline.’

Beyond peak debt: In our last book, "Hormegeddon", we described a phenomenon known as the ‘declining marginal utility of debt’. A little debt may be a good thing; a lot of it is not. At a certain point, you have more than ‘too much debt’, and it becomes toxic. Where exactly in the cycle we are, we don’t know. But our guess is we are already way beyond the place where we are fully indebted.

This is an economy built on debt. The whole capital structure - stocks, bonds, and real estate - now depends on excess debt…and more of it. In a correction, the only way to stop stock prices from falling and the economy from shrinking is to bring in some more debt. But when you do that a few times, you are soon beyond Peak Debt…which is to say, you’re way over the legal limit.

Debt has been growing three to six times faster than income for more than an entire generation. This makes the old 1.5-to-1 ratio of debt to income seem quaint. It is now 3.5-to-1 nationwide. Which is why deficits still matter. Every penny in debt that we add now is a penny that cannot be repaid, not by any plausible combination of economic projections. Because there is no way to ‘grow your way out of debt’ when your income is falling while your debt is still increasing.

Instead, you have to suffer the indignities of a correction, including a major reset in the stock market. That is what Warren Buffett is worrying about. That’s what happens when stocks that are more than fully priced meet a debt load that is beyond 100% of capacity. Stay tuned…”
- https://www.marketsandmoney.com.au/
Posted by CoyotePrime at 12:07 PM