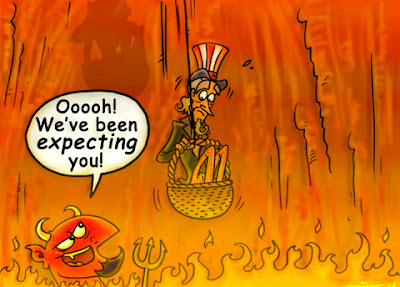 "And these are the good times.

As of the latest reporting by the Treasury Department, the US gross national debt rose by $41.5 billion on Thursday, February 22, to a grand total of $20.8 trillion.

Here’s the thing: On September 7, 2017, five-and-a-half months ago, just before Congress suspended the debt ceiling, the gross national debt stood at $19.8 trillion.

At that time, I was holding my breath waiting for the gross national debt to take a huge leap in a single day – as it always does after the debt ceiling gets lifted or suspended – and jump to the next ignominious level. It sure did the next day, when it jumped $318 billion.

And it continued. Over a period of 8 weeks, the gross national debt jumped by $640 billion. Four weeks after that, it had ballooned by $723 billion, at which point Fed Chair Yellen – whose cheap-money policies had enabled Congress to do this for years – said that she was “very worried about the sustainability of the US debt trajectory.”

Then Congress served up another debt ceiling – a regular charade lawmakers undertake to extort deals from each other, beat the White House into submission, and keep the rest of the world their on their toes. It goes like this: First they pass the spending bills, directing the Administration to spend specific amounts of money on a gazillion specific things spread around specific districts. Then they block the means to pay the credit card bill. 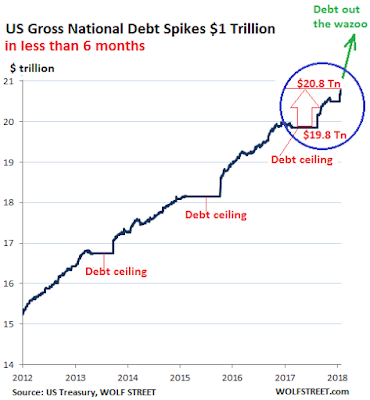 In the chart, note the somewhat technical jargon (marked in green) of what will happen going forward. The past week saw record issuance of Treasury debt, and that surge of Treasury debt issuance will continue. The Treasury department now expects that the debt will increase by $617 billion by mid-year.

The debt ceiling is like playing toss with a loaded gun: The gun will normally not go off because almost everyone is trying very hard to catch the gun without pulling the trigger. And historically speaking, it hasn’t gone off yet, and everyone hopes that it will never go off. It’s dramatic, and sound bites from those playing toss permeate the media, but what it really does is distract from the consequences of the fiscal policies that these same people are hammering out in Congress. Those consequences are best summed up over time in the gross national debt.

The trillions fly by so fast these days, we can’t even see them anymore. And afterwards we wonder: What was that? Where did it go?

The Treasury Department, in its Financial Report for fiscal 2017, which it just released, and which was silenced to death by the media, shows where that money came from and where it went. Now, just add the tax cuts and the ballooning expenditures. Read…  "US Treasury Posts Gigantic $1.16 Trillion Shortfall in Fiscal 2017, Hilariously Points out “Where We Are Headed”.
- https://wolfstreet.com/
Posted by CoyotePrime at 11:34 AM