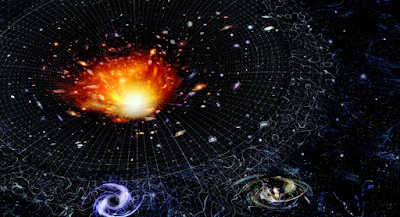 "Two centuries have elapsed since Joseph Haydn composed his magnificent "The Creation" oratorio. In all that time, no other musician has given us a better evocation of how the universe began. The famous C-major fortissimo chord of Haydn's oratorio- the glorious sunburst of sound that comes in response to the whispered words, "And there was light"- is an apt evocation of the modern astronomer's Big Bang.

Still, we have learned a lot since Herschel's time about the universe's beginning and probable end. Maybe it's time for a musical update. For example, Haydn's triumphant C-major chord comes five minutes into the oratorio, after a prelude of shadowy notes representing the unformed flux out of which God created the world. We are nudged by whispered voices to the edge of our seats. Then, and only then, a universe blazes into existence. Troppo! Perfection!

But modern cosmologists don't have a clue what went before the Big Bang. Their equations start at time t=0. Words like "darkness," "chaos," or "unformed flux" have no meaning. The fortissimo chord in any new composition will have to come right at the beginning. Not a terribly satisfying way to begin- musically, dramatically, or even scientifically. The question will always be "What went before?" But, for the time being, we must resign ourselves to ignorance. We sit down in the concert hall, open our programs, and BOOM, we are knocked out of our seats.

At the first instant, the universe is infinitely hot, infinitely bright. The Big Bang doesn't happen somewhere, like a firecracker in a dark room, but everywhere. Not like an alarm going off on a clock that's been ticking all night; the clock starts running as the universe begins. Space and time swell from nothing. The first matter- hydrogen and helium, with traces of lithium- condenses from pure energy. The universe expands and cools. The music, which began in thunder, begins a slow decline toward silence, diminuendo.

We ease back into our chairs. After about a half-million years, the temperature of the expanding universe falls below 3,000 degrees Kelvin, and the blaze of creation has weakened and shifted into the infrared, invisible to a human eye. The young, gassy universe becomes completely dark.

But the music doesn't lapse into total silence, for the universe is not empty, nor has time stopped. In the darkness, gravity gathers the cooling gases into clumps and streamers. The music suggests this thickening of matter. Legato becomes staccato, although barely audible. And in the darkness, on those lingering notes, we wait.

Knots of matter, with masses many times greater than the sun, are squeezed by gravity. When the temperature at the cores of the protostars reaches 10 million degrees, nuclear fusion begins, matter is transformed into energy, and the first stars are born. The music blazes out again, not in a single fortissimo chord, but in thrust after thrust of forte brilliance.

These massive first-generation stars burn fast and furiously, living for but a few million years before blowing themselves apart in colossal supernova explosions, seeding the universe with heavy elements. Galaxies form, and millions of stars, dust and gas coalesce to form massive black holes at their centers. The music representing the universe at this tender age of a billion years is wild and lively, booming timpani, soaring violins.

Now things slow down, become less violent. Star birth and star death continues, but at a more stately pace, moderato. A tender theme is heard in the background, in the flutes, perhaps, as carbon and oxygen, created in violence, unite with hydrogen to make the first organic molecules. Over billions of years, these grow in complexity, eventually becoming alive. The organic theme is taken up by woodwinds, until, as the music draws to its climax, life and intelligence come to the fore. The music becomes more melodic, thrusting notes give way to a lively dance, and...

And? Well, the best available evidence suggests that the universe will expand forever, using up all available energy, until eventually, hundreds of billions of years from now, light, life and intelligence are extinguished. The music winds slowly down into inaudibility. I suppose the lights in the concert hall should be extinguished too, so that the new "The Creation" ends with a long coda of utter silence and darkness.”
- http://blog.sciencemusings.com/
◆

Haydn, "The Creation", "Die Schöpfung",  Colin Davis
- https://www.youtube.com/watch?v=PG78HPG5RAg
Posted by CoyotePrime at 2:00 AM