"Discovered in the Abandoned Valley" 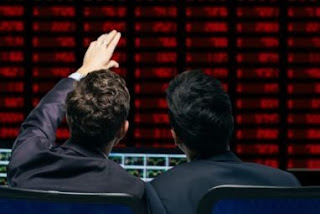 "Discovered in the Abandoned Valley"
by Bill Bonner

"Big Tech led the way up. It will probably be in the lead on the way down, too. Bloomberg: ‘The market’s darlings just suffered the worst day in at least three years. The NYSE FANG+ index, tracking the FANG [Facebook, Amazon, Netflix, Google] block and six of its megacap brethren, tumbled as much as 6.3 percent in the biggest rout in data going back to September 2014. Twitter Inc. and Nvidia Corp. led the plunge with double-digit declines as all 10 members retreated. Facebook, Amazon, Netflix and Google fell at least 4.5 percent.’

Fateful blow: As time goes by, the pins grow sharper and bolder. There’s no point in speculating about which one will give the fatal stab. Still, it’s fun to watch…and guess. The Fed, for example, let the world know that there would be three rate hikes this year. Neither the stock market nor the bond market can survive significantly higher rates.

Meanwhile, Congress passed the most irresponsible budget of modern times…with plenty of boondoggles for left, right, and centre. This was after having cut taxes, thereby guaranteeing huge deficits that will drive interest rates up further.

And over in the White House, the President of the USA is sharpening his knives…and swinging wildly. One day, he is imposing trade barriers. The next, he is at the centre of some sordid scandal. And then, he is threatening to let loose the dogs of war…Pompeo, Haley, and Bolton are straining against their leashes…not realizing that they will be sinking their razor-sharp teeth into the biggest financial bubble in history.

All these sharp objects are slashing, biting, and poking. But none of them may deliver the fateful blow. That could come from anywhere…or nowhere.

Bubble illusions: The bear market of 2000 was led by a sell-off in techs. The dot-coms were trading at such exuberant prices; they had to come down. In 2007, the sell-off began with the mortgage companies. They had reached too far…and then, as the Fed raised rates, they couldn’t roll over their debts.

At first, the commentators - notably, Trump’s new economic advisor, Larry Kudlow - brushed aside the bad news. Kudlow thought the trouble in the housing sector was over…when it had barely begun. Even when investment bank Bear Stearns went broke, the experts held fast to their bubble illusions. It was only when Lehman Brothers bit the dust that they realised they were in trouble.

And now, once again, Kudlow et al., deny that there is anything to worry about. They believe in the whole fantasy - that you can get rich on counterfeit money lent at phony interest rates… and that a small group of PhD insiders with no skin in the game can manage a $20 trillion economy better than 325 million people, each one of them with his own skin in the game and with far more direct, real information than the know-it-alls in Washington.

That conceit is at the heart of the bubbles and busts we have lived through for the last 30 years. And now, we are nearing the end of the biggest of them all. Stay tuned.

Abandoned orchard: In the meantime, we interrupt this report for a story with no point or purpose… This past weekend, we went over to the vineyard to do some chores. Among other things…mice and snakes have been getting into our little casita, so we decided to put a little strip of cement under the door to block their access. The work was not difficult. And we did it according to the local schedule…working in the morning, taking a two-hour siesta, and returning for four hours in the afternoon.

During the break, we wandered down to the river. Old willow trees lined the river, bending and twisting in every direction. Huge pampas grass clusters filled in along the banks. And in the fields above, green clover lay between the grapevines and the river. 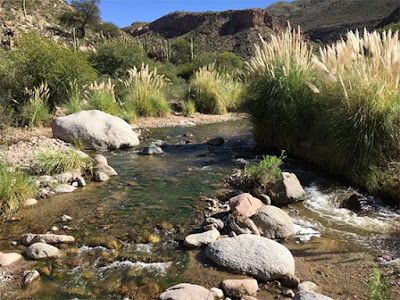 Above the river was an abandoned orchard with walnut, apple, pear, peach, and quince trees, overgrown and broken down. There was still some fruit on the trees, but the worms and bees had helped themselves long before we got there. Wherever you see an old orchard, there is always an old farmstead, too. It didn’t take long to find it. All that was left were the stone walls.

A small house. And a small storage shed or cookhouse. We looked around for an abandoned mortero, a large rock with a hole for grinding corn and seeds. That, too, is something you always find near abandoned houses. This valley was lived in for thousands of years, most likely in the same spots. We often find arrowheads, pottery, and morteros. But we found nothing there. So we headed down to the river. Along the river banks, further upstream, there are elaborate terraces marked by stone walls. The dirt, in which the Indians used to plant corn, tomatoes, squash, and other crops, has long ago been washed out.

All that is left are the rocks, laid out in rows…hundreds…thousands of them. They outline ancient fields in what must have been an elaborate farming system…with water distributed over hundreds of acres of terraced fields. It must have taken hundreds, maybe thousands, of people to farm so much land…by hand - keeping the water flowing through the canals…weaving their clothes…tending their llamas…and placating their gods. What had happened to them all?

Stones don’t speak: The sun shone brightly, as it always does. The willows waved gently in the wind. The river gurgled over and around rocks…and occasionally, went quiet as it ran into a toma that would carry it along one of our irrigation ditches.

The scene was so enchanting, so beautiful, and so inviting that we were soon skipping from stone to stone, crossing to explore the other side…and then back. It was on one of these crossings that we slipped and fell into the river. No trouble. The valley was deserted. The weather was warm. We simply took off our wet clothes and hung them over a tree limb to dry in the sun. Waiting, we lay down on the riverbank…and nodded off. In our half-sleep, we wondered about the hundreds of generations before us.

What had they thought about? What did they do without TV or Facebook? Did they live in constant fear, worrying about an attack by tribes on the other side of the mountain? Did they have enough to eat? Did they have their crackpot leaders urging them into pointless wars? Did they waste a big part of their time and energy on boondoggle projects? Did they have their scandals, their power struggles, their claptrap ideas? Did they live as man and wife? Did they sometimes lie on the bank of the river and wonder about those who came before them…or who would come after?

All we know about them is that they were conquered by the Incas in the 14th century…and by the Spanish a couple of centuries later. But that is just recent history. What happened in those thousands of years before? Everything has been washed away but the stones. And they don’t speak.”
- https://www.marketsandmoney.com.au/
Posted by CoyotePrime at 3:10 AM