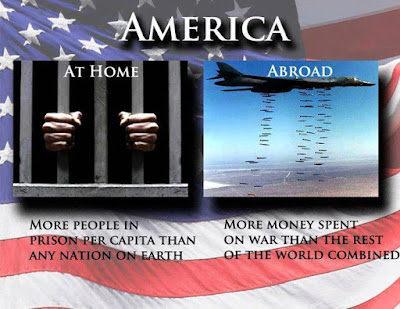 "A few thoughts on our disastrous  trillion-dollar  military: It is unnecessary. It does not defend the United States. The last time it did so was in 1945. The United States has no military enemies. No nation has anything even close to the forces necessary to invade America, and probably none the desire. A fifth of the budget would suffice for any real needs.

“Our boys” are not noble warriors protecting democracy, rescuing maidens, and righting wrongs. They are, like all soldiers, obedient and amoral killers. Pilots bombing Iraq or Syria know they are killing civilians. They do  not care. If ordered to bomb Switzerland, they would do it. This is the nature of all armies. Glamorizing this most reprehensible of trades is just a means of usefully stimulating the pack instinct which we often call patriotism.

The costs in lives and money do not include the staggering cost of weapons that do nothing for America or Americans. Do you, the reader, believe that you are safer because of the F-35? Do a dozen aircraft carriers improve the lives of your children? Will the B-21, an unbelievably expensive new thermonuclear bomber, make your streets safer? Then add the bleeding of engineering talent better spent on advancing America’s economic competitiveness. The country has many crying needs, falls behind China, but money and talent go to the military.

We cannnot escape from the soldiers. The armed forces have embedded themselves so deeply into the country that they have almost become the country. America is little more than a funding mechanism for what clumsily may be called the military-industrial-intelligence-media-Israeli complex. Some of these entities belong to the military (NSA). Some depend on it (Lockheed-Martin). Some use it to their own ends (Israel), but the military is the central infection from which the other symptoms flow. Congress? A storefront, a subcommittee of the Knesset or, as P. J. O’Rourke put it, a parliament of whores. Factories, jobs, contracts, towns depend on military spending. If the Second Marine Division  folded, Jacksonville NC would dry up and blow away. So would dozens of other towns. Without military spending, California’s economy would crash. Universities depend on military research funding.

The military has achieved its current autonomy by degrees, unnoticed. The Pentagon learned much in Vietnam, not about fighting wars, which it still cannot do well, but about managing its real enemy, the  public. The media, which savaged the war on Vietnam, are now firmly controlled by the corporations that own them. Thus we do not see  photos of the horrors committed by American aircraft bombing cities. While the existence of phenomenally expensive weapons like the B-21 is not quite suppressed, coverage is so slight that most Americans have never heard of it. This the Complex learned from the F-35 debacle. And of course Congress, thoroughly bought and wanting jobs in its districts, allows no serious opposition to anything military. Neither Congress nor the media point out the extent to which military expenditure dominates the economy, draining resources  from  civilian needs.

Why does the military not win wars? In part because winning is not in the interest of the Pentagon and those who feed on it. Wars generate profitable contracts for all manner of supplies and equipment. Either winning or losing ends the gravy train. For example, the war on Afghanistan of almost two decades has become an entitlement program for the arms industry, accomplishing nothing, killing countless peasants, and lacking purpose other than maintaining an unneeded empire and funneling money to the Complex.

How did the Complex free itself from civilian control? The crucial step in depriving the public of influence was the neutering of the constitutional requirement that wars be declared by Congress. The military thus became the private army of the President and those who control him. Then came the All Volunteer Army, which ended inconvenience to or mutilation of the children of people of importance, leaving the body bags to be filled by deplorables from Memphis or Appalachia or Mexico. America’s wars then became air wars and finally drone wars, reducing casualties to very few. The public, both ignorant and uninvolved, became acquiescent.

As I write, we wait to see whether Trump, and those behind him, will put America deeper into the Mid-East and perhaps war with Russia. If he does, we will read about it the next day in the newspapers. It will be expensive, dangerous, and of no benefit to anyone but the arms industry and Israel.

Despite the asphyxiating economic presence, the military keeps aloof from America. This too serves the purposes of the Complex, further preventing  attention by the public to what is not its business. In the days of conscription there was a familiarity with the armed services. Young men from most social classes wore the uniform however ruefully and told of their experiences. Not now. The career military have always tended to keep to themselves, to socialize with each other as the police do. Now the isolation is almost hermetic. You can spend years in Washington or New York and never meet a colonel. Military society with its authoritarianism, its uniforms and its uniform government-issue outlook is not compatible with civil society. To the cultivated, military officers seem simple-minded, conformist and…well, weird.

Add it all up and you see that the citizenry has no say– none– over the Complex, which is  autonomous and  out of control.  If the Complex wants war with Russia or China, we will have-war with Russia or China. Ask people whether they would prefer a naval base in Qatar– which most have never heard of, either the base or the country– or decent heath care. Then ask them which they have.

The military destroys America and there is nothing– nothing at all– that you can do about it.

A  rising Asia is challenging the America military Empire. The tide runs against the Complex. North Korea faced Washington down and became a nuclear power. The Crimea went back irrevocably to Russia. East Ukraine does the same. Iran got its treaty and becomes part of the world order. In the South China Sea, China ignores the US, which once was supreme in all the seas. The war against Afghanistan heads for its third decade and the war on Syria seems to have failed. Other things go badly for the Empire. The dollar is under siege as reserve currency. China grows economically, advances rapidly in technology and, doubtless terrifying to Washington, tries to integrate Asia and Europe into a vast economic bloc. The Complex beats the war drums as its fingers loosen on the world’s collective throat.

Washington desperately needs to stop the rollback of American power, stop the erosion of the dollar, block the economic integration of Eurasia and Latin America, keep Russia from trading amicably with Europe. It will do anything to maintain its grip. All of its remote wars in far-off savage lands, of no importance to America or Americans, are to this purpose. A militarized America threatens Russia, threatens China, threatens Iran, threatens North Korea, threatens Venezuela, expands NATO, on and on.

America has been hijacked." 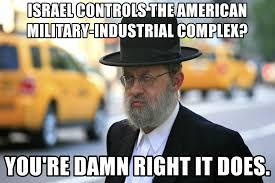 Fred Reed is a retired news weasel and part-time sociopath living in Mexico with his wife and three useless but agreeable street dogs.
Posted by CoyotePrime at 8:00 PM