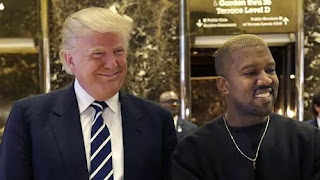 "Who hit Kanye with that white privilege stick? The rapper/ fashion maven/ theologian/ Kardashian arm candyman sent chills through the Twitterverse when he declared himself, somewhat elliptically, off-the-bus of the Progressive #Resistance movement and an admirer of the Golden One in the Oval Office. This came in his endorsement of YouTube blogger Candace Owen, who happens to not be down with the cause of the national victim lottery. Both Kanye and Candace have apparently crossed some boundary into a Twilight Zone of independent thought. Many probably wonder how they are able to get out of bed in the morning without instructions from Don Lemon.

Speaking as a white cis-hetero mammal, I’m not quite as dazzled by the president, but it’s a relief to see, at last, some small rebellion against the American Stasi who have turned the public arena into a giant holding pen for identity offenders — though it is but one corner of the triad-of-hysteria that also includes the Hate Russia campaign and the crusade against men. This nonsense has been going on long enough, while the country hurtles heedlessly into a long emergency of economic disarray.

Next in line after Kanye and Candace, a popular Twitter critter name of Chance the Rapper endorsed Kanye endorsing Candace, more or less, by tweeting “black people don’t have to be Democrats.” The horror this thought aroused! Slavery, these days, it turns out, has a lot of appeal — maybe not so much for laboring in the canefields under the noonday sun as for serving juleps in the DNC plantation house. It happened that Kanye’s mom was a college professor, Chance’s dad was an aide to Chicago Mayor Daley (Jr.), and later worked in Mr. Obama’s Department of Labor. Candace describes her childhood home in Stamford, CT, as “very poor,” but she rose far-and-fast out of college to become an executive on Wall Street in her twenties. What they seem to have in common is being tainted with bourgeois values, horror again!

In speaking up against the Victim Cartel, it is thought that they threaten a solidarity of narrative: that the USA (perhaps all of Western Civ) is composed of identity victims and identity oppressors. Candace, being a more conventional polemicist (i.e. not a rapper) makes the point overtly and repeatedly in her writing that all the “help” and solicitude black Americans have gotten from their overseers on the Democratic Party plantation has only made life worse for them — especially policies based on the idea that black people need lots of assistance to overcome structural racism and the legacies of slavery.

Luckily for the rest of us, the DNC has decided to put its mojo behind a lawsuit against Russia and Wikileaks for ruining the 2016 election. It’s an amazing exercise in idiocy — like, who, exactly, in Russia do they expect to subpoena for this epic showdown in court? If the suit finds a sympathetic judge who does not laugh it off — not so difficult these days — we’ll be treated to a fabulous Chinese fire drill in a three-ring circus of clowns running around in DNC dirty laundry. The party may not survive the suit. They’ve Whigged themselves into a final, fatal apoplexy of irrelevance.

I dunno about the perpetually scowling Kanye, with his periodic mood problems and spotlight-stealing antics on stage, or Chance the Rapper’s artificial hood raptures, but Candace makes the argument for the value of a common culture that might bind us together as a nation of individuals, not hostile tribes, starting with a language that everybody can understand. Of course, the whole Kanye / Candace dust-up may be forgotten by the middle of next week, and the country can go back to gaslighting itself into either a new civil war or world war three. Candace seems to have drive, guts, and stamina and there’s no sign that she’s going to shut up. Won’t some Ivy League university please invite her to speak, just to see what happens?”
- http://kunstler.com/
Posted by CoyotePrime at 7:04 AM