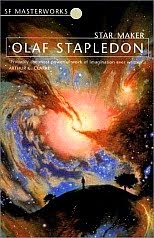 "Stapledon undertakes the immense task of describing the entire history of life in the universe. It dwarfs in scale even his 1930 book "Last and First Men," which is a history of the human species over two billion years. It tackles philosophical themes such as the essence of life, of birth, decay and death, and the relationship between creation and creator. The narrator starts with a concern at the clash of ideas on Earth and finds analogies to both communism and fascism among the aliens he visits. A pervading theme is that of progressive unity within and between different civilizations. Some of the elements and themes briefly discussed prefigure later fiction concerning genetic engineering and alien life forms. Arthur C. Clarke considered "Star Maker" to be one of the finest works of science fiction ever written.

The book begins with a single human narrator from England who is, via unexplained means, transported out of his body and finds himself able to explore space and other planets. After exploring a civilization on another planet in our galaxy at a level of development similar to our own that existed millions of years ago thousands of light years from Earth (the "Other Earth") in some detail, his mind merges with that of one of its inhabitants, and as they travel together, they are joined by still more minds or group-minds. This snowballing process is paralleled by the expansion of the book's scale, describing more and more planets in less and less detail.

The disembodied travellers encounter many ideas that are interesting from both science-fictional and philosophical points of view. These include the first known instance of what is now called the Dyson sphere, reference to a scenario closely predicting the later zoo hypothesis or "Star Trek's" Prime Directive, many imaginative descriptions of species, civilizations and methods of warfare, and the idea that the stars and even the pre-galactic nebulae are intelligent beings, operating on vast time scales. A key idea is the formation of collective minds from many telepathically linked individuals, on the level of planets, galaxies, and eventually the cosmos itself.

The climax of the book is the "supreme moment of the cosmos", when the cosmical mind (which includes the narrator) attains momentary contact with the "Star Maker" of the title. The Star Maker is the creator of the universe, but stands in the same relation to it as an artist to his work, and calmly assesses its quality without any feeling for the suffering of its inhabitants. (This point of view vis à vis God seems to be a distillation of Stapledon's readings in philosophy; most notably the works of Spinoza, and the more cynical philosophical ideas of the nineteenth century. Stapledon articulated these ideas to their fullest extent within a framework of modern cosmology) This element makes the novel one of Stapledon's efforts to write "an essay in myth making."
- http://en.wikipedia.org/wiki/Star_Maker
•••
FREE download, in PDF format, "Star Maker", by Olaf Stapledon:
- https://s3.amazonaws.com/
A comment: You will find no finer work of science fiction in all of literature.
As simple as that.
- CP
Posted by CoyotePrime at 8:30 PM