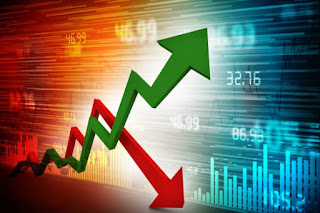 "Where Have All the Dip Buyers Gone?"
by Brian Maher

"Where have all the dip buyers gone? The Dow Jones plunged another 423 points yesterday… its fifth consecutive losing day. The S&P slipped 35 points, the Nasdaq a hellacious 121. Stocks have endured more daily losses of at least 1% this year… than the past two years combined. And it is only April.

Stocks opened lower again today. They closed the day mixed. What are we to make of it all? We introduced our “bond market versus earnings” theme Monday. The winner, we hazard, could establish the overall market tone - in the short run, anyway.

In one corner we have the bond market... Yields on the 10-year Treasury bond have crept toward the 3% threshold many analysts consider bearish for stocks. In the other corner we find positive corporate earnings… Over 80% of the companies reporting earnings this season have exceeded estimates - a bullish sign. But in our battle between the bond market and earnings… the bond market appears to be winning.

Art Cashin, UBS director of floor operations at the New York Stock Exchange: "We're maybe one-third of the way through earning season and 83% of companies that have reported have easily beaten the estimates. And yet the averages are below where they were when earnings season started. So it's something other than earnings that has the market very upset here."

Again, that something “that has the market very upset” may just be the rising 10-year yield. It busted clear through the 3% mark this morning - and held firm throughout the day.

Rising yields raise the costs of servicing debt. They also may suggest higher inflation ahead.

That means the Federal Reserve may raise interest rates more aggressively to head it off. And additional rate hikes are considered bearish for stocks.

So here we stand on this 25th day of April 2018. The bond market is slightly ahead on points. We don’t pretend to have the answers, of course. We are certain of two things only. One is our own uncertainty. The other is the fallibility of crowds.

In 2013, researchers Robin Greenwood and Andrei Shleifer conducted a study. They examined six sources of investor expectations for future market returns, covering the years 1963–2011. The results, clear as gin: Following periods of strong performance, investors expect further strong performance. And they invest accordingly - even when models indicate stocks may be dangerously expensive. But when the crowd is loaded up on one side of the boat... it is often time to reach for the life vest.

An American Association of Individual Investors (AAII) survey revealed 60% of respondents were bullish heading into this year. That was the highest figure in seven years. Only 15% were bearish. Economist after economist forecast higher markets entering this year. And who can blame them? Stocks only went up in 2017. Volatility had been licked. The Trump tax cuts would soon take effect.

Were stocks expensive? Maybe they were. But they’d been expensive for years. Only the perma-bears were roaring their usual alarms - as they’d been every year for the past eight years. But what has transpired since the new year?

Stocks “corrected” in February. The Dow Jones now seems to fall hundreds of points every other day. Fears of a trade war have frightened the horses. Bond yields are rising. Bring it all together and stocks now trade lower than the beginning of the year.

It is only April, we remind you. Stocks may still end the year higher… and the earlier survey may yet prove correct. But if that same investor sentiment survey was taken today… would it be nearly so bullish? Let us return to the aforesaid AAII survey… Bearish sentiment was only 15% at year’s onset, as stated.

And now? AAII investor sentiment data released April 12 reveal pessimism is back over 40%. Bullish sentiment - 60% to start the year - has fallen to 26%. If you seek a lesson in crowd psychology… you may wish to begin here.

If we were a betting man - and of course we are not - we might be half-tempted to turn bullish at this point. After all, we are constantly told that markets crash when least expected, when the guard is down. The guard is now up. If you fancy yourself a contrarian, now might be your chance to buy cheap - if you have the nerve. Do you?"
- http://www.thedailyreckoning.com
•
Gregory Mannarino, ”4/25/18 Post Market Wrap Up: Schizo Market? Get Used To It”
https://www.youtube.com/watch?v=jr3QJ6jmoeY
•
CNN Market Data:
- http://money.cnn.com/data/markets/