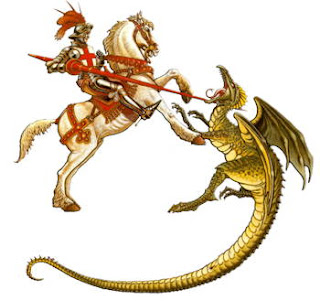 "The streets were crowded last night. On the main ramblas, so many people were strolling about that we could barely cross the intersection. Many of the women held a single red rose. It was the Day of Roses and Books - Sant Jordi’s Day - in the Catalan capital city. Women are given roses to celebrate the slaying of the dragon by Sant Jordi (Saint George) in the 4th century.

Men are given books coincidentally, to recall the deaths of the two giants of Western letters, William Shakespeare and Miguel de Cervantes, both of whom died on the same day: April 23, 1616.

Dragon infestation: Fake news is our subject today. We open our eyes and see it everywhere. Myths and legends - like political slogans, federal budget projections, and declarations of eternal love - are not subject to proof. According to legend, the town of Montblanc in Catalonia had a dragon infestation. In order to keep the dragon satisfied, the town fed it one person every day. And the person selected on the 23rd of April, 303, was - improbably - the town princess.

It was on this day that Sant Jordi, a Christian knight, showed up and quickly went to work. He drove his lance into the beast. The dragon was killed, its blood spilled upon the ground. And from the blood-soaked ground grew a red rose. The story is probably fake news.

If the historians are to be believed, the real Saint George was not in Montblanc that day in AD 303. Instead, he was in the ancient Greek city of Nicomedia, undergoing the kind of punishment that Donald Trump wants to give drug dealers. Saint George offered religion - Christianity, to be specific. And Emperor Diocletian had declared war on Christians. He ordered that all Christian soldiers were to be arrested. According to this account, George refused to renounce his religion and his head was cut off, making him a martyr to the cause.

Either a fool or a genius: History is jammed with fake news, too. The bare facts may be reported correctly. But facts lack all sense and meaning unless there is context. In addition to the ‘what’, ‘where’, and ‘when’, you need a ‘why’. And the ‘why’ is almost always so distorted by time, delusion, and wishful thinking that the meaning is more myth than reality.

Barcelona’s streets - at least in this part of town - are wide with a centre strip for pedestrians, protected from the Mediterranean sun by sycamore trees on both sides. 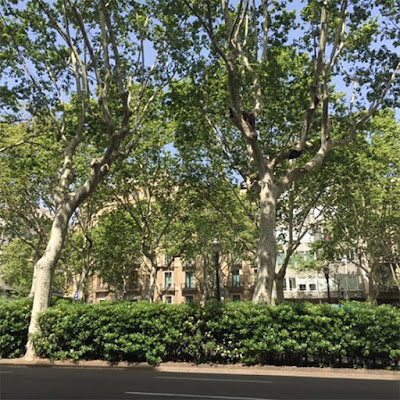 Sycamore trees shade the pedestrian walkway.
Buildings are handsome 19th or early 20th century constructions, many with elaborate overhanging balconies, often set distinctively on the corners and enclosed in stained glass. Architecture is important here; the city is most-often remembered as the home of Antoni Gaudí, whose works are remarkably inventive, clever, and playful. But when he began his career, it was not at all clear where he would end up. When he graduated from architecture school, his class director said: ‘Today, we give this degree to either a fool or a genius. We will see later.’ By the time he died in 1926, his peers had made up their minds; Gaudí was a genius. (Later today, we are going to see his famous cathedral, the Sagrada Família…stay tuned.)

Independence movement: From our brief inspection, the traditional or vernacular architecture of the city is fascinating in itself. The proportions are handsome. And the details are eye-catching and pleasant. The dark wooden shutters, for example, are much more attractive than the white metal ones of Paris. But what’s going on here? From balconies all over the city hang red and yellow banners. 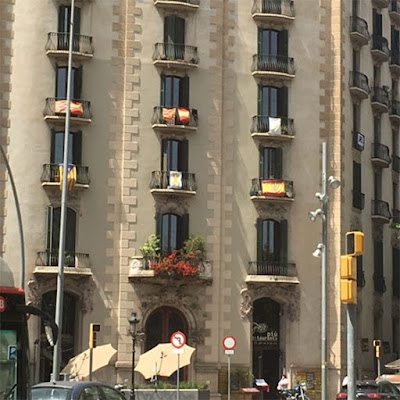 Catalan flags, a symbol of the independence movement.
‘Ahh…there’s an independence movement,’ explained a friend. ‘They’re asking for a separate government for Catalonia. They want to break away from Spain. And I know what you’re thinking…that they want freedom and independence so they don’t have to suffer the win-lose deals from Madrid. But you’re wrong. The separatists are like the originarios in Latin America. They want independence so they can impose their own win-lose deals. It’s not about liberty; it’s about control.’

We wondered what the history books will say. Will they say it was a brave struggle for the rights of man, for ‘self-determination’…and an echo of the Declaration of Independence? Or will they say it was just another political bamboozle, where a small bunch of zombies and cronies tried to get control of a government so they could rip off the public?

It depends how it turns out! The victors write the fake news. If you want to be a hero, make sure you win. Otherwise, Gaudí would be a fool, we’d have a Diocletian Day rather than a St. George’s Day, and Barcelona would be celebrating the dragon!"
- http://www.thedailyreckoning.com
Posted by CoyotePrime at 8:53 AM