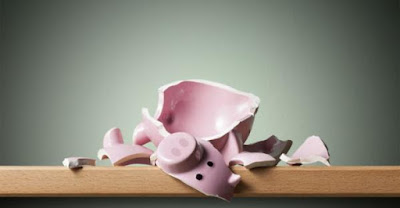 "Running on Empty"
by Robert Gore

"Across the land, public pension and medical funds teeter on the brink of insolvency. You can ignore pending problems until you can’t. For those who prize clarity and realistic thinking, these impossible to ignore crises should be welcomed. They focus attention on an inescapable fact: the world lacks the unencumbered assets and productive capacity to redeem the promises that have been made against them. Somebody’s going to get stiffed.

With war on everyone’s minds, public pension and medical funds delineate inevitable battles lines: governments versus taxpayers, the unproductive versus the productive, the aging versus the young. Those wars are liable to be far more consequential than the ones everyone worries about in places like the Middle East and North Korea.

Nothing calls attention to the absurdity riddling the public pension system quite like the $76,000 monthly pension drawn by Joseph Robertson, an eye surgeon who retired as president of the Oregon Health and Science University last fall.

In the good old days, government employment meant low pay, but job security and a decent pension. Now such sinecures means wages in excess of those paid in the private sector plus pensions that are far more munificent…and job security. For a lucky few like Doctor Robertson, their pensions are a triple 7 jackpot. Oregon calculates pensions based not just on recipients’ government salaries, but what they receive on any non-government gigs they had going on the side. Robertson’s pension is based on his remuneration as university president and what he made operating on eyeballs.

This is what happens when actuarial tables and actual rates of return are discarded in favor of the political power of public employees and their unions, promises that can’t be kept, and taxpayers picking up the tab who have no idea what the final bill will be. Public pension and medical crises bring into sharp relief the writing on the wall: Governments Can’t Deliver.

As Charles Hugh Smith recently noted, public retirement and medical liabilities are increasing so fast that no amount of tax increases can keep up. Long before a 100 percent tax rate turns taxpayers into slaves, raising tax rates becomes counterproductive, yielding less, not more, revenues. One of the nifty things about the public pension and medical crisis is that it’s local. As such, it’s offering real world demonstrations that when local jurisdictions raise rates to fund their pensions, productive people leave.

The poster child is Illinois. The state on down to its smallest political subdivisions - like the town of Harvey - are buried beneath underfunded pensions. Illinois’ courts have ruled pensions are inviolable, which leaves governments facing insolvency with only two options: raise taxes and cut spending.

Harvey was ordered by a court to fund its firefighters’ pension fund, which is only 22 percent funded. The town’s property tax rate is six times the average rate in nearby Indiana, and Harvey is still coming up short. The state is garnishing its tax revenues, and the town announced 40 public safety employees will be laid off. Why would anyone paying taxes in Harvey stick around for a future of ever-increasing taxes and ever-diminishing public services?

Many don’t, and Harvey and other localities in Illinois, including Chicago, are losing people. Out-migration statistics in Illinois, California, New Jersey, Connecticut, New York, and other net-loser states don’t capture the full scope of the problem. If one productive person moves out while one unproductive person moves in and starts living off state largess, there’s been no net out-migration, but the state suffers a loss (obvious to everyone except those fools and charlatans who will plump for an open-arms and open-wallet approach right up until bankruptcy).

Out-migration will get worse for net-loser states as the federal tax limitations on the deductibility of state and local taxes (SALT) kicks in. SALT has been capped at $10,000. After that, the wealthy have to pay the full measure of their high-tax states’ income, property, and sales taxes. The migration is gathering steam. It already costs twice as much to rent self-moving truck services from high-tax Los Angeles to low-tax Dallas as vice versa, and that spread will only widen.

State and local governments, their employees, and those on the dole can’t stop the productive from voting with their feet. The number who leave the US, however, is still a trickle. The federal government’s old age and medical funding problems, orders of magnitude greater than states’ and municipalities’, are no longer looming; they’ve arrived. The government could seal the borders to lock in the productive, but it wouldn’t prevent the slow-motion, but accelerating, catastrophe now underway.

The federal government’s ability to issue virtually unlimited debt and the Federal Reserve debt monetization machine mask the rot, but only create problems far larger than the ones they putatively solve. Low interest rates have destroyed state and local funds’ ability to achieve fairly safe returns, forcing them out on the risk curve to meet their rate of return targets, which are way too high. Underfunded as they are now, bear markets in stocks and bonds would obliterate them.

The older generation is pinning its retirement hopes on a younger generation confronted with huge debt, perpetually rising taxes, a shrinking economy, and dwindling opportunity. That’s not like hoping you can draw to an inside straight, it’s going all in, exchanging your hand for five new cards, and hoping you draw four aces. Good luck with that.

Oldsters like to complain that the youngsters are too preoccupied with gadgets and social media. They wish that were true. The youngsters are already questioning their impending debt servitude. The more perceptive are homing in on their parents’ generation’s self-granted benefits and unrivaled profligacy. You don’t have to search too far on the internet and social media to see the awakening.

Doting parents and grandparents who post their darlings’ every precocious moment and wouldn’t dream of letting them walking a block to school by themselves have no compunction about burying them alive under welfare and warfare state IOUs. In a world riven with conflict, the easiest war to predict is the intergenerational one.

It’s not strictly accurate to say that the state and local public pension and medical funds’ crises is the canary in the coal mine. It is but one in an aviary of canaries. The fund canary is in extremis and may well be the first to expire; the others will certainly follow. Picture the horror as the adult canaries and their fledglings wage mortal combat for those last few molecules of oxygen.”
- https://www.theburningplatform.com/
Posted by CoyotePrime at 2:37 AM