“Warp Speed: How The Outer Edges of the Universe Travel Faster Than The Speed of Light”

“Warp Speed: How The Outer Edges of the
Universe Travel Faster Than The Speed of Light”
by Philip Perry

"As children it’s driven into us in early science classes as a cardinal rule: nothing can travel faster than light. But at least one thing is thought to, or at least appears to be - the fundamental material of the universe itself. In a Universe of 2 trillion galaxies, astronomers believe there are galaxies moving away from ours at a rate faster than light speed. As a result, we’ll likely never get to see them.

13.78 billion years ago, the solidarity exploded in an event we call the Big Bang. This was a point in the universe of infinite density and heat. After the explosion, the universe expanded at the rate of 10¹⁶ in a fraction of a second, during a period of inflation that occurred at a velocity faster than the speed of light. After that, you'd think that the universe would expand at a constant rate or even slow down. If it had slowed down, we'd be able to see right to the edge as there wouldn't be anywhere that would be too far for light to travel. 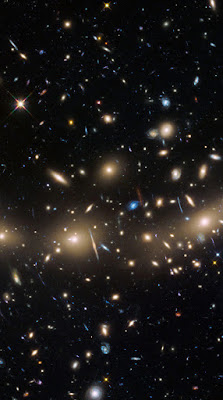 A relatively nearby galaxy cluster, MACSJ0416.1–2403. The thin streaks and arcs, mostly blue, are galaxies in the far background whose images are warped due to gravitational lensing by the foreground cluster. NASA / ESA / J. Lotz (STScI)

Instead, the rate of universal expansion has been speeding up. And there are places in the universe that are so far away, photons will never make it there. As a result, the edges of our cosmos remain in shadow. What lies beyond is an intrepid mystery we might not ever solve.

Expansion still occurs today, quizzically, at an ever-increasing rate. Note that it isn’t just matter but the fabric of the universe itself, as the matter in a way rides atop of it. What’s more, the galaxies farther away appear to be moving faster than those closer to us. There may even be ones close by that are moving faster than light. If there are, we’ll find them difficult to detect. 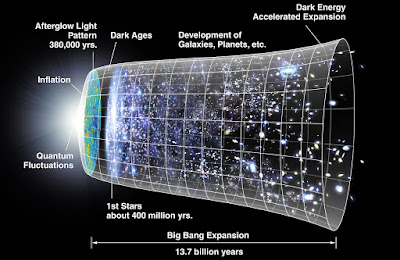 Click image for larger size.
Timeline of the expansion of the universe since the Big Bang.
Credit: NASA/WMAP Science Team.

Galaxies and other matter are like sesame seeds resting atop a piece of dough, with the dough standing in for the fabric of the universe. When we place the dough in an oven it expands, and those seeds on the outside rim appear as if they expand out faster than those near the middle. The same may be true of the universe.

The rate of universal expansion is 68 kilometers per second per megaparsec. A parsec is 3.26 million light-years, while a megaparsec is a million parsecs. For every parsec away a galaxy is from ours, you add 68 km/s to its velocity.

We can tell how far away a galaxy is by something called red shift and blue shift. As a galaxy moves away, the light from it takes longer to reach us. All that space between the galaxy and us forces the wavelength of the light to elongate, moving it toward the red part of the spectrum. This is known as red shift. Those objects moving away from us appear red while those moving toward us, whose wavelengths shorten, appear blue. 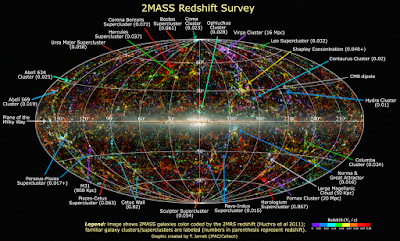 Click image for larger size.
The furthest thing out there that we can detect is the cosmic microwave background (CMB). This is the light residue left over from the Big Bang. Created 13.7 billion years ago, it now stretches out homogenously 46 billion light-years away in every direction. (So, a sphere 92 billion light years in circumference. - CP)

According to Paul Sutter, Ohio State University astrophysicist and COSI Science Center Chief Scientist, the notion that the speed of light is the topmost speed for matter (or information), comes from Einstein’s special relativity. But this is part of what he calls “local physics.” It can and in fact must be applied to things nearby.

Far out in the deepest reaches of space, however, general relativity applies, but special relativity may not and with it, the speed of light as the topmost velocity becomes less certain. So what are the implications of an ever-accelerating universe? Nothing short of a cosmic heat death. Over billions of years, galaxies are thought to expand so far out from each other that the gases that congregate to form stars won’t be able to get together. They’ll be spread too thin.

Light from other galaxies won’t be able to reach us, either. And with no new stars forming, there will be none to replace those that have burned out. That means a slow fading of all light in the universe, and in its place, a cosmos forever shrouded in frozen darkness. That’s of course unless other forces can counteract this phenomenon."
- http://bigthink.com/philip-perry/
◆ 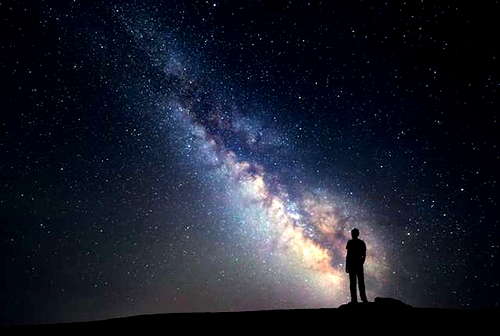 "The eternal silence of infinite spaces frightens me. Why now rather than then? Who has put me here? By whose order and direction have this place and time have been ascribed to me? We travel in a vast sphere, always drifting in the uncertain, pulled from one side to another. Whenever we find a fixed point to attach and to fasten ourselves, it shifts and leaves us; and if we follow it, it eludes our grasp, slips past us, and vanishes for ever. Nothing stays for us. This is our natural condition, most contrary to our inclination; we burn with desires to find solid ground and an ultimate and solid foundation for building a tower reaching to the Infinite. But always these bases crack, and the earth obstinately opens up into abysses. We are infinitely removed from comprehending the extremes, since the end of things and their beginning are hopelessly hidden from us in an encapsulated secret; we are equally incapable of seeing the Nothing from which we were made, and the Infinite in which we are swallowed up."
- Blaise Pascal
◆
Remember... 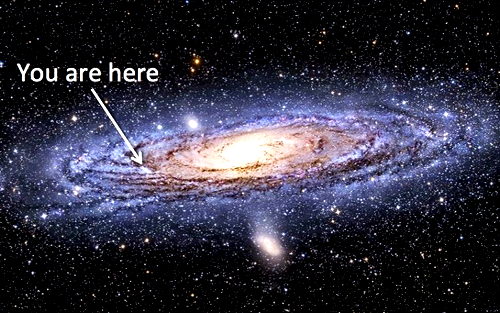 In a Universe containing 2 trillion galaxies, 13.78 billion years old,
92 billion light years in circumference.
And if you think the world revolves around you, think again...
Moody Blues, "Gypsy"
Posted by CoyotePrime at 8:19 PM