"Affirmative Action and the American Mind: If Any” 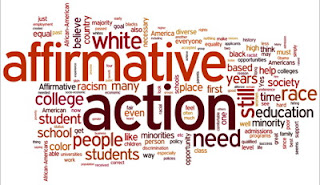 "Affirmative Action and the American Mind: If Any”
by Fred Reed

“Affirmative action” means hiring people because they can’t do the job well. Near-synonyms are “diversity,” meaning groups that cannot do the job well, and  “inclusiveness,” which means seeking people who you know cannot do the job well. These underpin American society, and have ruined education. For some time the sciences seemed less susceptible to the prevailing enstupidation because mathematics would present an impenetrable barrier to the the insufficiently bright. This, astonishingly, is changing. The sciences are being dumbed down to–are you surprised?–spare the feelings of included affirmative diversity.

Which somewhat curiously brings us to international politics and an aspect of scientific schooling that does not appear in the mainstream press: Psychometrists, people who endeavor to measure intelligence, universally agree that the Chinese are more intelligent than Eurowhites. So are the Koreans and Japanese. Since for the most part psychometrists are themselves white, their conclusions presumably do not spring from racial chauvinism. The Chinese advantage is measured at around five IQ points. This is not great but makes a considerable difference at the high end of the distribution.

As a matter of observable – if, to many, unwelcome – fact, virtually all of the work in STEM fields (science, technology, engineering, and mathematics) in America is done by whites. Blacks contribute nothing and Hispanics, to date anyway, very little. For reasons of politics we must pretend not to notice. When a piano is falling toward one’s head, one may pretend that it is not, but not for long. The arrival of the piano will ensure this.

America’s prosperity and place in the world very much depend on invention and excellence in the STEM fields. Boeing sells airliners, and provides jobs to Americans, only because its airliners are technically equal to those of AirBus. A lowering of technical capacity will have unfortunate consequences for the country.

America’s whites number at about 200 million, the Han Chinese of China about a billion–five times as many. Beijing understands perfectly that technological virtuosity is crucial to the country’s well being. It spends  heavily, and successfully, on increasing China’s performance. Those who follow such things note the speed of the the advance. A fully developed China will be able to deploy several times as many researchers and engineers, these being at least as intelligent as America’s, on problems of its choosing. Numbers count. They will count more as time goes by.

This strongly suggests that, unless Washington starts a major war to prevent it, or China collapses from within, the future is in the East. It also suggests that the United States would be well advised to do all it can to maintain its competitiveness for as long as it can. Instead it seems to be committing imperial harakiri, deliberately lowering the quality of education in all fields at all levels.

America’s suicide note: "How Identity Politics is Harming the Sciences," by Heather Mac Donald. It is long but well worth reading. It documents the systematic lowering of intellectual standards in the sciences to increase the numbers of women and underperforming minorities. This, as she makes clear at length, is strongly supported by the federal government. A few examples:

“Entry requirements for graduate education are being revised. The American Astronomical Society has recommended that Ph.D. programs in astronomy eliminate the requirement that applicants take the Graduate Record Exam (GRE) in physics, since it has a disparate impact on females and URMs….” (These are “Underrepresented Minorities.”)

“Mathematical problem-solving is being de-emphasized in favor of more qualitative group projects; the pace of undergraduate physics education is being slowed down so that no one gets left behind.”

“The National Institutes of Health are another diversity-obsessed federal science funder. Medical schools receive NIH training grants to support postdoctoral education for physicians pursuing a research career in such fields as oncology and cardiology. The NIH threatens to yank any training grant when it comes up for renewal if it has not supported a sufficient number of “underrepresented minorities” (URMs).”

Mac Donald goes on to tell of school after school accepting diversity with credentials well below those of real students, of schools dropping the GRE requirement because it makes obvious that in STEM fields women and minorities are not performing as desired. (“Minorities” always means “poorly performing minorities.” Chinese, Japanese, Koreans and so on don’t count.)

The comparatively young may be so steeped in such corrupted pedagogy that they do not know how the sciences were formerly taught. A description: I went to a small Southern school, Hampden-Sydney College, of respectable but not astonishing credentials.  I believe the pre-dumbing-down SATs were a bit over 1100. This was before social justice had replaced competence as a reason for study. Freshmen were expected to be fully literate and know algebra cold. Remedial courses would have been thought crazy. If you needed them, you needed to be somewhere else. In any event, if you had graduated from high school without being able to read, you were unlikely to learn.

Freshman chemistry at H-S – much like freshman chemistry in other schools I suppose – was  not a cooperative shared learning experience that avoided unnecessary facts. It did not exist to avoid disturbing heartwarming but dim-witted minorities. It was– boom!– s-p hybrid bonding orbitals, resonance in benzene rings, the wave equation del-squared psi and a bunch of constants, probability densities, quantum degeneracy, equilibrium constants, Pivnert the ideal gas equation, the mathematics of a mass spec, the Krebs cycle, and endless problems: 2.4 grams of phlogiston anhydride are dissolved in 2 liters of 2,4-diethyl-polywannacrackerine. What are the products and the weights and molarities of each at equilibrium?

It was real chemistry, sink or swim, and most of us swam because we were looking at med school or graduate work. If there had been affirmative-action students –”students” – most of the material would have had to be eliminated. Mathematical illiterates do not balance redox equations or interpolate four-place log tables which, in those slide-rule days, we did.

Pop quiz. Take out a sheet of paper. Question: Are Chinese students, there or here, studying de-mathematized semi-chemistry for reasons of identity proportionality? Or are they, at every high-end university or elite high school in America, eating the white kids alive?

Affirmative action in the sciences needs to be scrapped. For everybody. The purpose of studying astrophysics should not be to make social-justice warriors feel good about themselves. If women do not do well at engineering mathematics, let them become neurosurgeons.”
- https://www.theburningplatform.com/
Posted by CoyotePrime at 8:08 PM